While hunting for decals for my planned NF-5A, I came accross the Unofficial Airfix Modelers Forum. This turned out to be a good place to hang around even when not hunting for decals. As a sort of club activity, the folks there engage in group builds, where some theme is picked and all participants take a shot at one or more kits during the timeframe set for the group build.
The timeframe is typically about a month, and given that the time between start and finish for my projects is more commonly measured in years, that is normally way too fast for me. Sometimes however, I just can't resist..
Note that due to the tight timeframes involved, I'll typically ignore this log while the GB is in progress, and cut-and-paste the log entries from the forum to these pages afterwards.

This group build conveniently overlapped with a planned vacation. This gave me the opportunity to crank up the intensity of work quite a bit, so I decided to dig in. Subjects were to be any aircraft thet flew with the RAF 617 squadron.
I knew that 617 used Tornados, and I had just such a kit in the stash. I refer you to the specific build for the story of how that got out of hand even before I started. Aside from that, I couldn't really resist re-running the Dambusters movie one evening, and this in turn got me infected with Lancaster fever, and a Lancaster was added to the list.
The Lancaster is, of course, sold with Dambuster decals, but for the Tornado an aftermarket set was called for. This sheet also includes decals for a Mustang and a Mosquito. It's a terrible shame to throw out perfectly good decals, so more plasic was bought to stick them on. No amount of regret over wasted decals is going to get me daft enough to add the other Lancaster or Vulcan though. Even my madness has limits.. 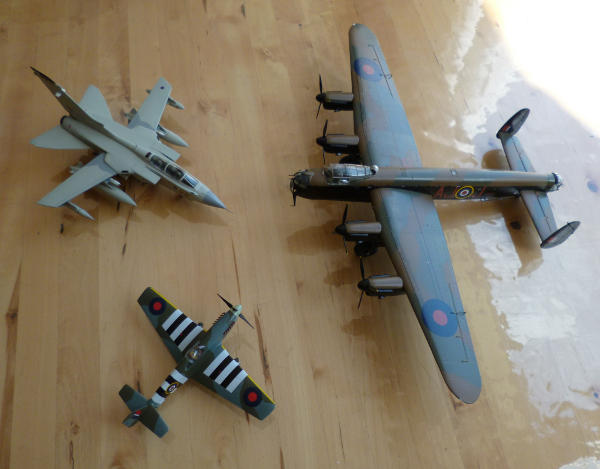 I got myself suckered into taking part in this charity project. While not officially a UAMF GB, the forum is involved, so I'm parking it here.

Actually, sometime we do make them like we used to. Start after lunch, finish before dinner..