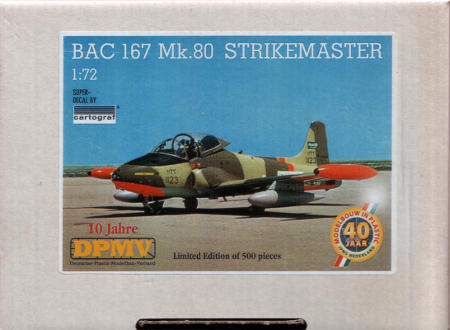 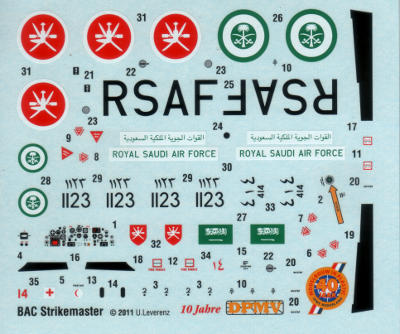 My final entry into this little endeavour is a fairly special Strikemaster.
A limited edition run (500 copies) of these were produced for the celebrations around 10 years of DPMV (a German modelling organisation) and 40 years of IPMS in The Netherlands. It is also one of the, if not the, last production run done by Revell in Germany, made on their last remaining injection moulding machine that was at the time still in use for testshots. To make every kit unique, they'd thrown in several colours of plastic, causing each sprue to have a unique pattern of interblending colours (or so they told us).
The IPMS were handing their alotment out to members on a first come, first serve basis, but to my significant amazement, they failed to shift them all, and I ended up with a second copy. The one I'll be building is number 245, as number 102 has a more attractive pattern of colours in the plastic, and will therefore stay untouched as one of my very few collector's items.
These kits came with decals for the Saudi markings also included with the original boxings, but instead of the New Zealand markings, the second option on these was for a machine from Oman, which I'll be using for this build.
I'll be resisting the urge to AMS the heck out of this rather special kit, preferring instead to do this OOB, which seems more appropriate given the circumstances.

2017-02-01
There's not a whole lot of assembly involved in this kit, but I took it as far as it would go before a painting session for the pilots and "cockpit".
The intakes will need a bit of care and attention, and the wings will need some filler. I also intend to box in the wheel wells with some epoxy putty (green stuff, I think, but I'm a bit whimsical in such matters).

2017-02-01
The intakes have been cleaned, there's filler in the far too large gaps between wings and control surfaces, and lead in the nose. I get the feeling this will be a fairly quick build, especially by my slow standards. 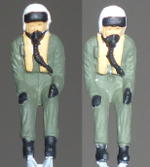 2017-02-02
I've got the crew painted up. It will be a while before they get installed in their office. Dry fitting showed the entire contents of the cockpit can be installed with the fuselage closed, and since these are somewhat vulnerable bits, I'll postpone that until just before painting the aircraft itself.

2017-02-06
The fuselage is cleaned up, as are the wings, and I've boxed in the wheel wells with green stuff. Fit of the wings is very loose, so I'll have to come up with some cunning plan to get the dihedral right, or at the very least, symmetrical, before I attach the wings.

2017-02-07
As a little sideshow to this project, I decided to restore my old Strikemaster. I'd kept that one around because I have rather fond memories of Matchbox Strikemaster, and this was the least ugly of the old bunch, but in it's current state, it has now outlived it's usefulness. Just chucking it seemed a bit harsh, so I decided to go for a decent overhaul.
As built, it sported an extremely dubious USAF scheme, with SEA camo approximated with Dark Earth, Uniform Green, and Cockpit Green over Light Grey, and although it looked mostly OK from the top, the underside was a mess tube glue. I got the canopy off with little effort, and no damage, and removed the crew (they won't be modified). Much of the paint on the canopy came off with ethanol, but I'll have to resort to lye for the more stubborn bits. Getting rid of paint with lye works like a charm, but getting all of the lye off afterwards is no fun, so I hope to be able to avoid that for the airfame. I sanded of the worst of the glue misery and the uglyer blobs of paint, did some initial cleanup on some seams, and have just hit the result with grey primer. Tomorrow, I'll know just how tough this is going to be. If restoration still seems feasable than, I'll probably chop off the wingtip tanks, and use bare wingtips and markings from the new Sword kit for the (how appropriate) Swords demo team.

2017-02-07
The cunning plan for the wings failed to produce perfection, but I think I twiddled it close enough. I'll leave the cement to cure properly before continuing, but it's already clear some filler will be needed. I'll probably stick on the stabilisers first, and do filler and cleanup all in one pass.

2017-02-08
All the major parts are assembled. Once I've cleaned up the current batch of filler, it will be ready for a blast of primer to see what I missed. It's beginning to look the part. 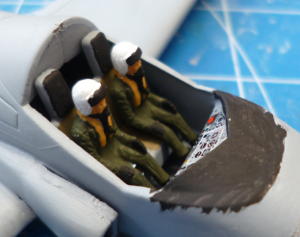 2017-02-14
The crew have been installed in their office.
The canopy is now on, and the Clearfix I use to plug up minor gaps is drying. Once that's done, there will be a coat of clear for the canopy, followed by grey along the cockpit edge. Only then will I use Vallejo putty to completely smooth over the canopy to fuselage join. Per implication, not too much picture worthy progress in the next couple of days, but such things take time.

2017-02-15
Work on the restauration job has also been proceeding apace. What I hope to be the final batch of filler is curing, after which the crew go back in their seats and I'll be able to close up that one as well. There's been a change of plans regarding the markings: due to a rather complete lack of spare stencilling, which would ruin the Swords plane, this one will also be finished as an Oman airforce plane, in a rather later two-tone blue-grey wrap-around scheme from an Xtradecal sheet. Might not have been my first choise otherwise, but it has a delightful lack of generic markings

2017-02-18
The canopy rim is cleaned up, and the model will start spending time in the paintshop from Monday.
I'v succumbed to the temptation to improve the model just a bit. I wasn't going to, but the nose wheel doors were just too much; the kit parts are square in cross section.. No. Just no. Not happening...
Some scrap plastic sheet will be substituted.

2017-02-22
The insides of the wheel wells, such as they are, have been painted, and the top sides have received a coat of matt Dark Earth. Since that is perhaps the most fingerprint sensitive colour I know of, I'll have to shoot some gloss varnish over it before continuing; I'll have to mask the camo pattern, and that involves groping all over the plane.

2017-02-24
Main painting is completed; just minor bits on the undercarriage, and the anti-glare panel to go.

2017-03-01
Everything but the gear doors is on the model, and the process of decalling is started. Small boring steps from here, until there's a completed model. 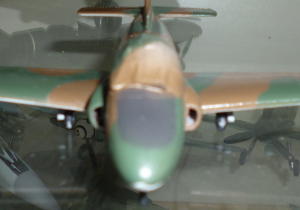 2017-03-02
Ow shoot. I got the anti glare panel on skewed..
Some devious and/or cunning plan will need to be devised to fix this.

2017-03-05
As it turned out, only very limited cunning was required to fix the anti-glare panel; not only was it skewed, it was also much too small. Increased to it's proper size, it covered most of the old panel, and the smallish rim that sticks out, get lost in low contrast. After that, it was just a matter of painting the canopy frames (always a nervous moment), and hitting it with Purity Seal (even more nerve racking business; it would not be the first time a clear coat from a rattlecan wrecked the paintjob). Fortunately, all went well.