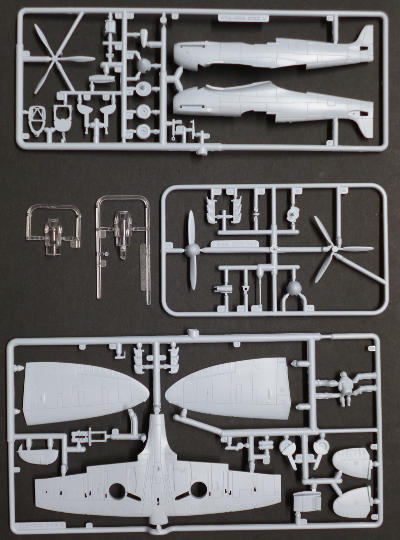 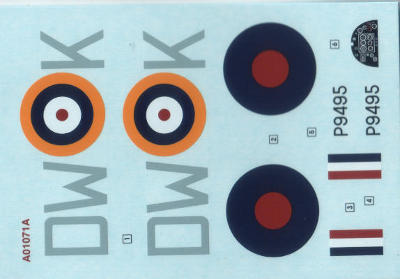 Almost two years ago, the local Airfix distributer supplied a bunch of 'Project Airfix' kit for a kids' event, and despite the kids running us totally ragged all day, there was a very small number of leftovers, including this little firebreather. It's been waiting for a good reason to come out of the stash since.

Even the simplest kit tends to get built over several months unless I've got weeks of vacation to build in, and I don't have any of that this month, so chances are this won't finish in time, but on the other hand, I feel like taking on a short and simple job right now. Of course, the mere act of describing it thus pretty much guarantees this is going to be a long and wild fight, but I never could keep my mouth shut..

I said this was going to be a 'project' leftover, but that's not entirely true. About half of the parts will come from that kit, the other half will be swapped out with a regular Spitfire I/IIa kit, which apart from some extra parts is identical (it's actually the parts from that kit that are shown on the right). Identical except for the colour of the plastic used that is, so I'll get to enjoy a mixture of light grey and ridiculously bright and cheery blue, for that authentic Matchbox feeling..

Actually, nostalgia has nothing to do with it, I just like having some colour contrast between the parts of my kits, and somehow they look livelier during production in multiple colours.

Other than the parts swap, I'll build this one straight out of the bag; I have two unallocated sets of decals for early Spits, and the other one isn't a BoB plane... I might swipe/copy some additional stencilling from the other set though, the project kit is (understandably) sparsely marked.

2015-02-28
Spent a bit of time playing with plastic before getting down to the business of the day. Like I remembered, the cockpit is nice but very fidgetty. I ended up joining the bottom bars to the two bulkheads (no glue for the rear one), clamping them between the two fuselage halves, and then applying glue through the wing hole, hopefully joining the rear bulkhead to the bottom, and both bulkheads to the port fuselage half. Tomorrow, I'll separate the fuselage halves, and hopefully find the interior staying in place.

2015-03-03
The main wing is now attached, and has been fitted with the usual bunch of intakes and radiators. Fit to the fuselage was just a bit tight, to the point of just about clicking into place and locking. A small bit of filler seemed appropriate where the wing meets the lower fuselage at the front and rear, and that's now setting.

I can't believe how fast this thing is coming together, just the flying surfaces at the tail, and the usual small and fragile bits to go. I've probably spent too much time on big, complex kits these past years.. 2015-03-06
Main construction is done.
The canopy decided to give me some grief by becoming all muddled up. No idea what happened, but somehow the "protective" coat of Clear took exception to removal from the sprue and a bit of filing along the edges. I'll try to fix it later on, but for now, I have spares, and I'm not afraid to use them.

2015-03-08
There was surprisingly little work needed after the first shot of primer, so after a minor dab of filler and consequent sanding, I put on the undercarriage for real, masked the canopy with rather more care than earlier, and let fly with the rattlecan again. The plane is now a quite boring grey, and awaiting painting later, probably Thursday at the earliest.

2015-03-09
There was surprisingly little work needed after the first shot of primer, so after a minor dab of filler and consequent sanding, I put on the undercarriage for real, masked the canopy with rather more care than earlier, and let fly with the rattlecan again. The plane is now a quite boring grey, and awaiting painting later, probably Thursday at the earliest.
Sky (well, beige green) was never going to be an easy colour to get decent coverage with, so the need for multiple layers was anticipated. I'm not so happy about what's happening around the air intake and in some of the panel lines though; it seems to be drying into a very pale tan there, and that's not what I had in mind.

2015-03-13
In retrospect, my initial coats were probably too wet. The third coat I put on was a much, much leaner mixture, but still managed a few "puddles". I then switched to thinning with a mixture of water and alcohol, and with that the paint no longer gets a chance to run, but is pretty much dry, or at least fixed in place, on impact. Two more coats of that, in an air-to-paint mixture that regularly had me wondering if anything but air was coming out of the brush, sorted the bottom rather nicely.

2015-03-15
More airbrushing today, dark earth this time. I overdid it again on the first pass, and the paint promptly gathered into puddles, where it sat, separating into it's components faster that the water could evaporate. First the brown pigment dries, than the blueish grey stuff, and finally the last of the water goes. Predictably, the results weren't that great. Still, the result made for a good initial coat. I almost had in on the second pass, but one small puddle still managed to form and mess me up as above.
I suspect the way my compressor behaves has something to do with it; if I set a certain pressure, it drops below that once the air starts flowing, in turn messing up the paint flow. I'll set pressure with air flowing through the airbrush from here on, see if that improves things. It certainly seems to have worked for the third and final coat of dark earth, and the barrier coat of clear that followed it.

2015-03-16
The spitfire just returned from the paintshop. Sky and earth worked as advertised, and the canopy remained clear. Beyond that, things were less desirable..
The overly soggy coat of earth had found a way to creep under the masking tape covering the undersides of the tailplanes. Sometimes I wonder why I even bother with the stuff..
Worse is the bad behaviour of the green paint. Even more than the other two, this paint just doesn't want to stay mixed; the components separate almost as fast as I can mix them. The keep this up in the airbrush, and as a result, the airbrush either clogs up with nearly pure pigment, or (on different settings) throws out more paint than I need. The result is an anything but even coat. After this, I'm going back to enamels again for a while, just to recover/cool down:-( I'll still have any number of problems that way, but at least with enamels I know how I manage mess things up, and what to do about it.

2015-03-17
I've been puttering away with some green paint and a small brush, and I have some hope I managed to fix the green on the wings. I'll hit it with a few layers of clear as a barrier coat before tackling the canopy frames and the corrections on the underside; with these top colours, I don't want to be doing work that's going to involve getting my fingers all over the model trying to get a good grip before I have some fingerprint preventer in place..

2015-03-18
That fix wasn't nearly as good as it seems. After a coat of clear, it is painfully obvious that the touched-up section is a completely different colour than the airbrushed bits. I guess I'll have to get creative about this ..

2015-03-20
Repairs to the paintwork on the port wing were not successful, and I had to resort to repainting the wing. That, on the other hand, worked out better than I'd dared to hope.