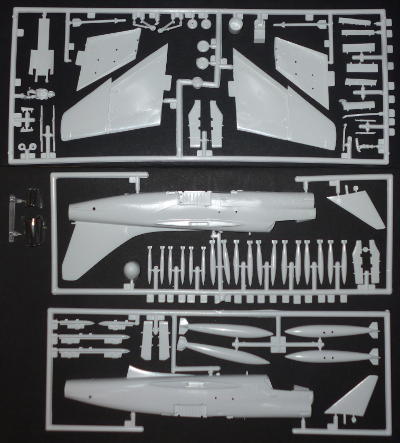 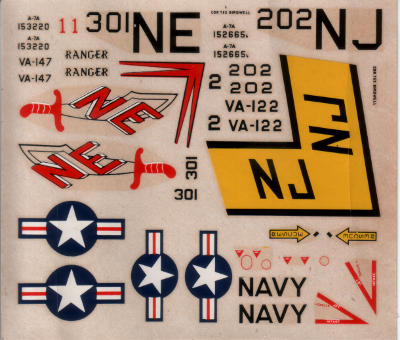 I picked up this kit a few years back, thinking I'd finally take a stab at one of those Frog kits the older hands are always going misty eyed about. You can probably imagine my disappointment when I found out this was no Frog, just a clunky old Hasegawa in a Frog box. The A-7 was quickly banished to the naughty corner of the stash, to languish there until I found some obscure use for it, or, more likely, my heirs throw it out with the rest of my useless junk after I croak.

Fortunately for said heirs, this GB came up as the perfect excuse to throw the thing together in no time flat, so they'll have one less weird box to deal with.

This is actually going to be a first for me. Once paint came into the picture, I rarely built a complete model in a single afternoon. The enamels simply took too long to dry, and I always preferred to wait for that rather than make a total mess of it. This is not to say I wasn't impatient; the results of trying to speed up drying by holding a freshly painted model in the hot air coming from the toaster were quite spectacular..

So while teaching an old dog new tricks might be be hard, we'll see how this old dog deals with learning an old trick. High speed building, with the occasional dab of paint thrown in. This is going to be such a mess..

13:30
A mess indeed. Sure, you can throw it together, but the join between the fuselage halves alone would be a week's work just to get it clean. Dubious fit, rock hard plastic, and sprue gates that would look oversized as castle gates. Brrrr..
I'll grab me a nice mug of tea to un-ruffle my feathers after the assembly so far, and then get to work with some old fashioned Humbrol 64 light grey, which I had to buy for this project as it is quite probably the only grey not permanently in collection these days. Long time since this was the default grey..

14:44
I got the initial coat of paint on. Clearly, it will need another; the days where paint actually did the job in one go are now lost in the mists of time thanks to H&S and green meanies. Still wonder if two or three coats of new paint are actually less harmfull to users and the world at large than a single coat of the old stuff..
It's been decades since I last covered that large an area with a hairy stick rather than an airbrush.
Anyhoot, both the paint and my back and neck need a pause.. 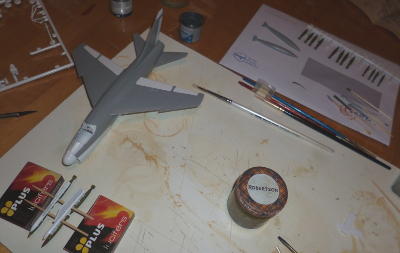 16:22
I'm declaring DNF.
The second coat of grey is on the model, and should be sufficient, but it will be several hours before I can touch this thing again without smearing paint all over the place, which rather prevents completing the build within the next hour.
I'll keep going, of course, but within the scope of this GB, I lost due to time-out.
I might just manage at 'normal' blitz speed

1941
Still plodding on..
It never fails to amaze me how good those really old decals still work, especially when compared to some of the brand spanking new decals I've had vicious fights with.
The Corsair has just received it's wheels, and most the the smaller odds and sods have been pre-painted. I'm stuck in another waiting cycle as those wheels harden, and while the paint on the bombs fully dries.

2140
The Corsair is standing on it's own legs, and beginning to look the part.
Unfortunately, it is now time for some grumblings..
I have to take back some of what I said about the decals. True, they handle perfectly well, but they do not seem to be overly motivated to actually stick to the model. The stars-and-bars on the lower wing is well on it's way of peeling back off. I'm afraid some cheating is called for to overcome this rebellious tendency, and the ones on the top serface have been hit with some solvent. The one below will get a similar treatment, as will anything else that goes on.
The olive green paint on the bombs is a lazy git. It just won't dry at any kind of decent speed. I just hope it will have finally gotten around to doing it's job by tomorrow morning.
And while I'm on the subject of bombs, the locator holes in some of the larger ones don't match up to the pegs on the bomb racks. I was counting on those peg and hole combos to supply me with cementing surfaces.. New trick required..

1116
The olive green actually dried up completely overnight, and as a result, the bombs were so much easier to work with. I think it has something to do with not sticking to fingers anymore. Whatever the case, they now went on the racks without a hitch.
The decals, however, turned even nastier. The serial on top of the wing reacted very badly to the solvent, and the remaining decals (with the most welcome exception of the huge scimitars) insisted on breaking up into several parts. No nice
Still , the deed is done.