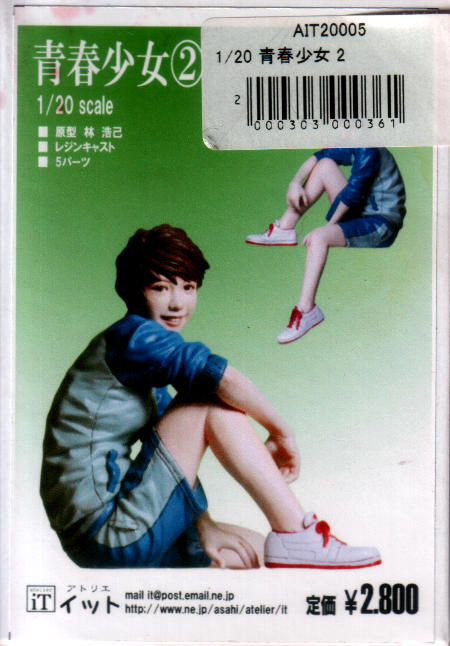 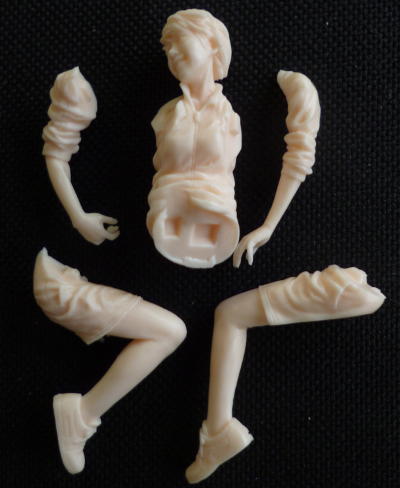 I'm always on the look out for modern civillian figures, and that means I sometimes run into unexpected treasures. At some point, the hunt led me to the site of AtelierIT, a small Japanese producer of resin figures. Most of their products turned out to be of no use to me, and some were definitely NSFW, but they also had this incredibly life-like figure. She, too, is mostly useless for any of my longer term plans, but I just couldn't resist.

2018-01-01
After some serious blitzing, I've completed construction to the point where painting should start. That is to say, I joined up the legs.
Due to the way the girl is doubled over on herself, it's almost impossible to access many parts for painting once fully assembled. Fortunately, fit is quite good, and the parts breakdown is entirely along panel lines (panels of cloth in this case, but still). I seems to me the sensible sequence is to first paint up the skin, shorts and torso, then join torso and legs (and fill/fudge the join), and finally paint up the sleeves and join the arms to the torso, followed by more fill/fudge work along those joins.
Even on closer examination, detail remains excellent, right down to the patterns on the soles of her shoes.
Since the paintwork starts with skin, which I'll be doing in oils, I expect I'll be doing very little but boring groundwork until the weekend after next; I need a large continuous block of time to do this right. I might get some work in on the base earlier though; we'll see.

2018-01-21
She has her first coat of artist's oils on; a lighter mixture than I'd usually use for well tanned soldiers, and with rather less Sienna in it, as Asians aren't all that pink. The rest of the skin goes on later today, once this coat has cured a bit.

2018-01-01
It took a while, but I got her skin on. So far, I'm happy. I'll take a fresh look tomorrow evening, but I don't really expect to find anything needing correction. The arms are painted as well, of course, but they were too tricky to pose at this stage.
European skin is hard enough, even when you're normally surrounded by examples, but East Asians are different. I just hope the Chinese lady at the office didn't notice I paid just a bit more attention to her face lately, or she might have gotten all sorts of wrong ideas.. 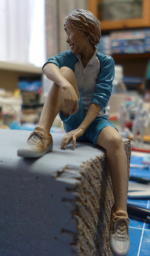 2018-02-04
The little lady is starting to come alive. I'll have to put a little more work into the joins between the parts than I'd hoped, but nothing I can't handle.

2018-02-11
I'm calling this done.
I had a devil of a time getting the sheen on the skin and hair right (if I managed at all). Flat looked too flat, satin looked too glossy, and theoretically, there's not much in between. What we have here, is Purity seal overall (very flat), then a brushed-on coat of Sylvacryl satin (high quality wood varnish; very nice satin but too much for the skin) on the skin and hair, and finally Humbrol Satincoat (almost flat) of the skin. On smaller areas of skin, you can easily get away with flat, but too much skin is showing here to have that option.
Given the level of detail, I had hoped to put some mother-of-pearl finish nail polish on her, but while I found some that was precisely what I had in mind, it needs a relatively large area to actually work; on the minimal area this figure provides, it looks like silver, which in my eyes looks horrible (real live girls have been know to disagree with that evaluation, but this is my paint job). So, no detectable nail polish for this one.
The base, stolen from an old metal Tamiya artillery officer, is temporary; I hope to eventually have her sitting on the end of a wooden jetty, presumably in a park, but a base like that is a major project in it's own right, at least for me.