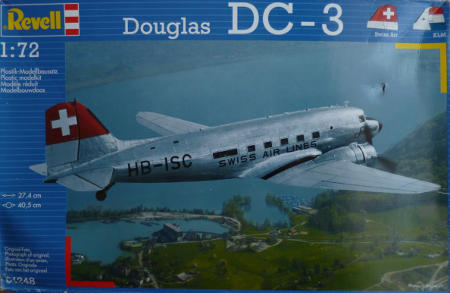 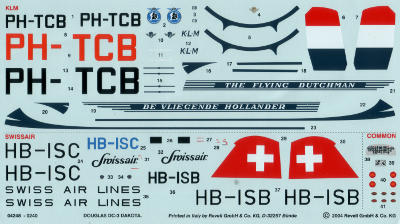 An earlier project left me with a bad case of Dakota-mania. Since the 80s there have for all intents and purposes been two Dakota kits, the Esci and the Italeri. People who claim to know think the Esci is the better of the two, so the hunt for a bunch of these was on. Revell at some stage reboxed the Esci kit, and I thought this was it. It was the Italeri instead (I've since found the Esci rebox as well, but that's another matter). One edition of the Italeri came with an absolutely magnificent decal sheet for several airlines, and again, this took me more than one attempt to obtain (through no fault of my own in this case; sellers aren't omniscient either). As a result, I found myself with a total of four Italeri Dakotas on my hands that I have no real need for. All this before Airfix announced their new tooling, so the status of the Esci kits is now dubious as well..
So, I'm drowning in Dakota's, I'm allways looking for a good place to park completed models, and then someone shows up and says he wants to auction off a bunch of newly built kits for a good cause. Too good an opportunity to pass up.

The kit I'll be building is the Revell edition shown. Well, almost. The box is in tatters, and I need something to store the parts in while working, so I'll actually be using the plastic and box from an Italeri release. They're identical, except for the decals which will come from the Revell boxing, and since the decals are the crucial characteristic, I'm the declaring the Revell boxing the victim of this project.
The Revell kit promises KLM markings, but this is true only by a serious stretch of the imagination. What they provide is the markings used on an exhibit from the Aerodrome museum in Lelystad, shown here in a picture found on flickr. 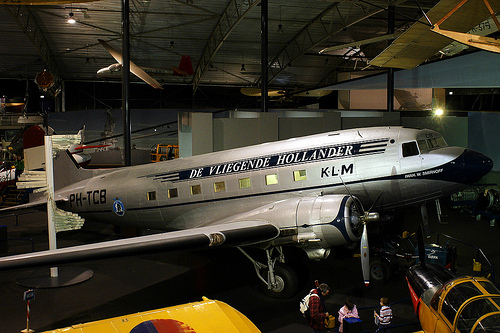 As near as I could trace, the actual exhibit was the result of a project to build an airworthy Dakota from two rundown machines. One was canibalised for parts, and rebuilt into the museum piece, the other went on to fly. The museum airplane (or should that be "model"?) is displayed in markings that were never actually used in flight. They are very close, but there are significant differences.

The instructions specify light grey for the interior, but it looks more like light green in the picture. Being a lazy bastard, I went with the same interior green as was specified for the wheelwells. Not good, this is way too dark. I'll have to rework that, after deciding what colour to use. The freaky part of my mumbles "RAF Sky", or possibly the slightly greener Humbrol colour Airfix suggests for it's Spitfires..

2014-01-06
Despite some airbrush issues (turns out it was spitting due to a wrecked nozzle; time to break out a spare..), I've got the inside re-painted with Humbrol 90. Hideous colour, but fairly close to what the reference appears to show.
Some dry fitting revealed that at least one of the fuselage halves is crooked. This will take some persuading before it fits, as at present I can get either the front of the rear of the halve to line up, but both is a challenge. 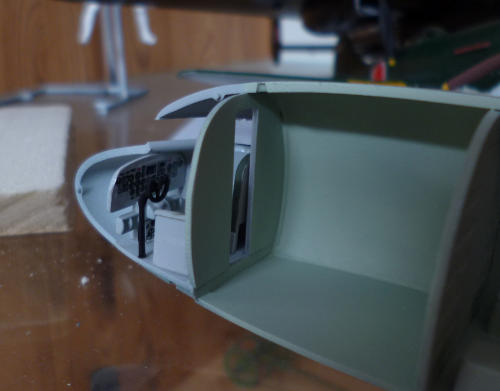 2014-01-17
I've completed the interior, such as it is, and fitted new windows. After that, I wrestled that bent fuselage into some semblance of submission, although alignment was not perfect. I've done some initial filling and sanding to deal with this, but I'll have to restore some panel lines before I continue (if I wait much longer, I'll lose what guidance from the original line I have left). Bit of bad luck with the fuselage; I checked with another identical kit in the stash, and that doesn't have these problems.

2014-01-26
The wings and tailplanes are on, and it's beginning to look like a Dakota. What little filler was needed is now curing.
With the rough shape now complete, I can start looking for a suitable box to convert into a shipping container for the finished product; I want to build the container before the model becomes too fragile for (relatively) rough handling.

2014-02-13
Over the past two weeks I've completed the first round of building, filling and sanding, and shot a coat of primer onto the kit just to see where further work is needed. As it turns out, this will involve just a bit of surface sanding and some very minor corrections.
I've found what I believe will be a suitable box for shipping the result once completed, and have started construction of the supports that will hopefully protect the plane in transit.

2014-03-10
The transport box has been completed, so if I do manage to finish this model, I know I can ship it safely. This weekend was supposed to be the time when this build went from "started" to "nearing completion", but a serious run in with the far-too-common-cold killed off any chance of getting some work done.
Today, I finally reached the point where I could expect workable amounts of time between attempts to cough/sneeze my lungs out, so I attempted to install the windscreen, as one of the few remaining steps before hitting the paint shop. Problem is, the transparency provided is just plain the wrong shape to fit the gap in the fuselage, in fact, it's not even close. I expect I'll manage to come up with something, but with only three (somewhat crowded) weekends before the deadline, I'm getting worried.

2014-03-21
I just spent about an hour gasping through a gasmask while misting on Alclad. No pictures yet; those will have to wait until I've gathered up the courage to remove the Maskol and tape masking (unmasking always scares the bejeezus out of me, and never more so than with metallisers, as correcting any problems after unmasking is pretty much impossible). Right now, it looks extremely shiny though..

2014-03-25
Aaaarhg! I'm an idiot!
The model has suffered a, shall we say, unintentional livery change. I got one of the decals on perfectly, absolutely completely fused with the paintwork and plastic, but half an inch from where it should be. No way to fix this short of finding replacement decals and stripping the kit down to bare plastic for repainting, and that's just not going to happen in a week. I have no choice but to stick with the new design, and see if I can make it look good...