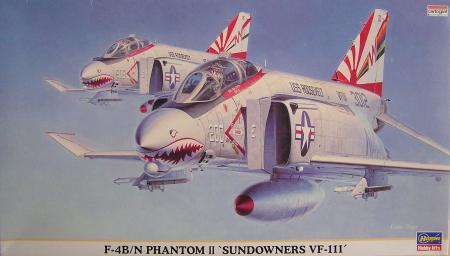 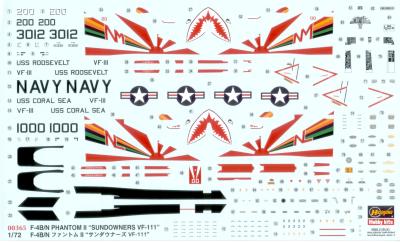 This Phantom is a itch in very bad need of scratching. As described in the decals pilot project page, there are plenty of Navy Phantom markings available, and even several from VF-74, but this particular pattern had to be produced locally, which is a rather pointless excercise if you don't put them on a kit sometime. I've also wanted to do a good quality Navy Phantom for ages, and although the Airfix/MPC F-4B of VF-111 came out nicely, the kit does show it's age. Lastly, although I have scores of new tool Hasegawa Phantoms in the stash, I've never built one, and I want to find out first hand just how good they are.

VF-74 was one of the first Squadrons to use the Phantom operationally, starting with the type in the very brief time before the revised designation system came into effect, and the Phantom became the F-4. Thus, the markings on this aircraft identify it as an F4H-1 rather than F-4B. In later times, one could assume that a Phantom on an air to air mission would carry Sparrows under the fuselage, and Sidewinders on the inner wing stations, but early on somewhat different patterns were used. This Phantom will have only a single Sparrow on the port wing station, a pair of Sidewinders on the starboard wing, and three fuel tanks on the centerline and outer wing stations.

The kit, as said, is a new tooling Hasegawa, which means half a million parts. At first glance, this looks like an excellent kit, and given the price and obvious amount of work that went into it's design, it had better be. Unfortunately, closer inspection reveals some unnecessary problems. First, and admittedly one of my pet peeves, is the rear cockpit. There is a blanking plate provided to fair over the right console, but not for the left, which should have one as well. Looks like Fijimi's F-4K/M kits are still the only ones to get it right, even after twenty years on the market. The consoles should also be at an angle, but the kit has them almost level; again, the aging Fujimi does a better job. For some reason, just about every part has locator pins associated with it, but there are none for the sensor housing under the nose. I just know this is going to be a hassle. Now, I realise that these are details, and that not buying aftermarket replacements for each and every interior bit is apparently for amateurs, but that doesn't mean they shouldn't get it right. I also find that Hasegawa have been extremely stingy when it comes to the things under wings. The Phantom is completely unarmed, not even the Sparrow missiles are included with the kit, and there are no centerline or outboard wing pylons provided. They expect you to buy their separate weapons sets to arm the plane, which is cheap, but can be dealt with, but I haven't a clue what to do about the pylons, other than steal them from, once again, the Fujimi kits. Ripping them off the fuel tanks won't work, as the tanks had integrated pylons that were slightly different from the normal pylons. A measly four small pieces of plastic would have made this kit so much nicer, eight if you include the Sparrows. I'll forgive the absence of Sidewinders, as these came is too many variants. And they were so close...

Some minor construction has by now taken place on the kit. The breakdown of the parts, so far, seems to be well thought out. Fit, on the other hand leaves something to be desired. I'm very glad this kit has recessed panel lines, as filler and sandpaper are definitely in it's future.

2017-04-23
The Graveyard project put Phantoms back in focus, so I did a quick status check on this one as well. Turns out I'd messed up rather badly at the start.
I'd managed to get the wrong fin tip installed, which was easily fixed. Nastier was the fact that I'd managed to deform most of the rudder, warping it to the left. This would have been a real problem to fix, but hey, I've now got a spare fuselage from the excess RF-4B to play with, so I chickened out and swapped the rear hulls. The 'new' tail has lost one of it's pitots, and will need some residue from the tape that was supposed to protect the pitots removed, but it should be an easier fix.