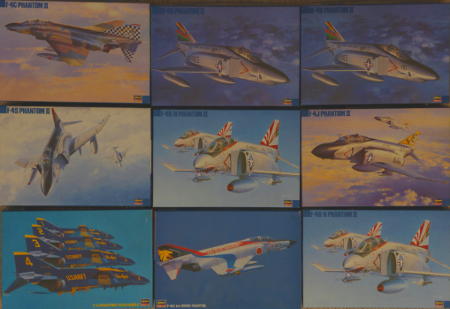 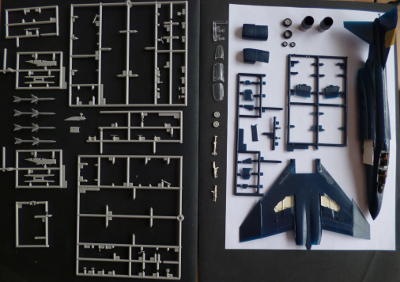 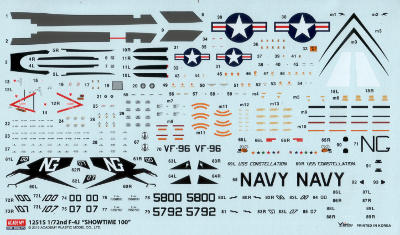 A few months ago, the owner of Flash Aviation asked me if I'd be interested in a number of half built, and thus unsellable Phantoms, which might or might not be complete. If it means I get to go home with a pile of phantomesque plastic, I am of course always happy to help take out the trash. Once home, I sat down for some serious inspection and inventory work, and it turned out that although started, they were all essentially complete, and that the work done by the previous owner was of very decent quality. In other words, I had nine second hand Phantoms on my hands, with, as they say, one careful owner.

I have a ridiculous pile of Phantoms in the stash, plastic for every set of interesting markings I ever managed to get my hands on. So, what to do with these? Duplicates smell of production work, for which I feel a moral obligation to demand payment. New subjects sounds great, but if I'd been able to come up with any, they would have been in the stash by now.

Most of the kits are of types that have seen combat, and those that aren't, can easily be converted to such. In combat, bad things occasionally happen to men and machines. Since these were, in a way, all dead Phantoms, I decided to build them as just that: Phantoms that had been lost during combat operations.

OK, workable idea, but this was going to take some research to see if it could be done. The first candidate was easy, since Cunningham and Driscoll's Showtime 100 is not exactly hard to find decals for, and although is made aces of it's crew, the plane itself did not survive the mission and went down after an excounter with a SAM on the way home. Arriving back on the boat in a search and rescue helo, and without their Phantom, was probably not the homecoming the crew had in mind, but it's an easy start for my little project. I had the brand new tool Academy in the stash, which has decals for this very plane, so I committed a spot of larceny, et voila, the first kit was ready to go.

The others were a bit more work, but I found a website which listed all F-4 losses suffered by the US. Very helpful. Air force Phantoms are a bit boring, really, as they rarely have more distinguishing features than tail numbers and perhaps the occasional shark mouth. Thus, they were a matter of jotting down the numbers for later decal creation. For the USN and USMC machines I managed to find lost machines for squadrons for which the kits included decals anyway. This reduced those to a number printing excercise as well. to my rather immense relief. The only kit I didn't manage to find a suitable use for, was the second RF-4B. Although several were lost, all were from the same squadron, and aside from different numbers, they were identical. Too boring. Only one of the recce birds will be built, the other will form the core of the Hasegawa spare parts box. Useful, since backdating the F-4S will require hard wings, which I don't have in excess in this pile.

2017-04-23
The cockpit on Showtime 100 was nicely done, and pretty much complete, so I've started the process of closing the multi-part canopy. Not surpisingly, fit is excellent.
The original owner clearly intended to build this model OOB, which implies Blue Angel colours, and no weapons except for the customary four fake Sparrows. That won't work for a Vietnam war plane; as far as I can determine, on it's final flight Showtime 100 carried two Sparrows in the rear bays, a big centreline fuel tank, and 2 AIM-9D Sidewinders plus 3 Rockeye clusterbombs on each of the inner wing pylons. My predecessor had thrown out all the external tanks, and the reinforcement plates for the inner pylons, but oddly (although I'm not complaining), the pylons themselves and the associated Sidewinder rails are still there. He'd also opened up the slots for the Sparrow fins in all four bays, which means I'll have to fix the forward ones, and of course hadn't opened the locator holes for the inner pylons prior to assembling the wings. Some fiddling with a very bright flashlight shining through the wings made the location of the holes very visible though, so this was easily fixed. The spares box supplied most of the things under wings, and the EJ didn't really want that navy centreline tank anyway. That leaves the reinforcement plates to dig up.

2018-06-01
The reinforcement plates have been found in a pile of spare parts for Hasegawa Phantoms a fellow modeller wanted to be rid of. As I said earlier: always happy to help take out the trash
Construction can resume.