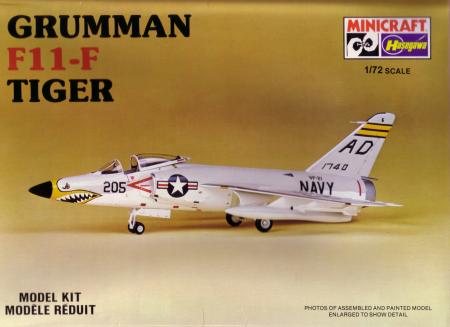 The theme for the September meeting of the IPMS SIG Naval Aviation meeting is to be Grumman Cats, and since this was just such a plane, and since it was lurking near the top of the stash, I decided this grinning furball will be my contribution.
Although marketed by Minicraft, this kit, and many others, were in fact Hasegawas in disguise. I built one another Tiger less than a year ago, so this project will probably reveal unpleasant things about ability to learn from recent mistakes. Keep your eyes open for embarrassing repititions of mistakes; I know I will..
As said, the plastic in this kit is identical to that of the VF-121 Tiger I built earlier, so I will not repeat any comments on that. Of course, if something previously unnoticed shows up I'll jot it down, but please refer to the earlier build if you're looking for notes about the kit itself.
The plastic is identical to the Hasegawas, but Minicraft sometimes did their own decals, and that is something to be grateful for. Hasegawa decals of this era tend to have a creamy, somewhat yellow colour instead of white, and to be susceptible to general yellowing, but the Minicraft decals I've seen so far have neither issue.

I intend to build this plane with the ordnance load shown on the box, mainly to show off the area ruled fuel tanks, a distinctive feature of the Tiger. I may end up replacing the sidewinders from the kit with some after markets, but that has yet to be decided. Work on this kit will initially be slow, as I'll be using it to pass the time while glue and paints set on the other kits under construction. With any luck, I'll have the cockpit completed by the time I'm ready to turn my attention to this in earnest.

2005-07-24
Reality, in the form of the work involved in moving to a new home, caught up with me and forced a change of plans. I missed the june meeting of SIG naval aviation, and now this kit has become the main focus of attention
I've assembled the cockpit, and in the process got a serious warning regerding the decals, which have a demonstrated ability to fall apart in water. Not good. There's no way of telling whether this is limeted to a single decal, or if most of the sheet is affected, so as a precaution I coated it with liquid decal. Lets hope this does some good.
The fuselage is now closed, and as on the previous Tiger kit, it will probably not be possible to get rid of the seam between the two halves without wrecking the raised panel lines in the process. Then, I tried to preserve the lines, and was forced to accept a visible seam. This time round, I'll see how it looks when I sand off the panel lines completely. Given the small scale, I suspect this will look better. I have yet to decide if this sanding will be applied to the entire plane, or just to the fuselage. I'll know when I see what it looks like.
For some strange reason some of the Tiger kits have the sidewinders, but not the launch rails for them. Between the various kits I have there are plenty of launchers, so this isn't a problem, but I do find it highly curious. The pictures above show the sprue with the launchers, but the kit under construction didn't have them. 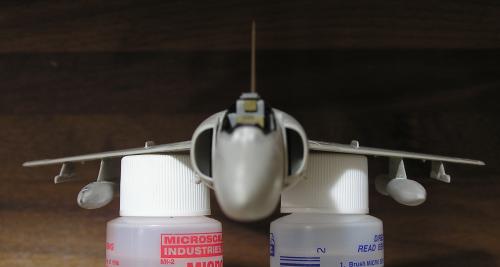 2005-08-23
The Tiger is progressing nicely. As seen in the picture, most of it is now assembled, and the tanks and sidewinder launchers are installed. Just the undercarriage and cockpit to go before I can whip out the airbrush for this one.

2005-09-29
The Tiger is finished, and I'm happy with the result, but, as usual, there were some bumps in the road. That said, I managed to avoid the mistakes of the previous Tiger, so I guess there's hope for me yet.
Sanding the fuselage smooth, yet leaving the panel lines on the wings on, worked out. There's quite a number of old kits still in the stash, so this may well become standard procedure. The disadvantage though, is that while putting on the decals, there's nothing left to line them up with, so there is a price for this.
Airbrushing went nicely this time round. A good coat of primer really is the thing when shooting xtracrylics. I did notice a tendency to clog up the airbrush though; maybe I should experiment with different pressure settings and amounts of thinner for a bit. Another thing that continues to bug me is the 'things under wings'. Barring an absolutely, totally perfect fit between pylon and wing, I can either accept a less than perfect fit when mounting the pylons after painting and decalling (no opportunities left for filler and sandpaper at that stage), or fit the pylons, and often associated fuel tanks, before painting, and have them get in the way on a grand scale. So far I've been doing the latter, but this is not the road to happiness and perfect kits.
I've found out that in some situations, using both acrylics and enamels of the same project has distinct advantages. The white and grey on this kit are acrylics, the other colours are not. As usual, I managed to get some overspray onto unprotected paint. Fortunately, the acrylic paint is all but impervious to white spirits, so I could clean away the enamel overspray with that and leave the paint that was there intentionally unharmed.
Decalling also had some amusement to offer. In and of themselves, the decals behaved very well. Whether this was due to the precautionary layer of liquid decal will forever remain a mystery, but I can live with that. What's harder to live with is the way Microset is behaving. When left to dry on a kit, it leaves behind a dirty, rusty coloured residue. Although this can be cleaned off relatively easily, Im worried about what it will do under the decals. The material is there also (if not, what's the point of having it), but I can't clean under the decal. I really don't know what to make of it, especially with regards to long term effects.

2010-07-12
Five years later, and not even a hint of a problem with Microset residue under the decals. I guess it's safe enough. Of course, I haven't missed Microset at all over these years, so there's no apparent reason to use it either..