This kit is one of two given to me by my collegues when I left the place where I'd worked for four years. I decided that, regardless of the quality of these kits, they would be built straight out of the box, to ensure that the results would be immediately recognisable, and because I think gifts should be appreciated as they are, not hacked to death in a fit of advanced modellers syndrome. This desire to do things by the box also meant that the markings were by definition going to be those shown on the box cover.

I must admit to being a bit apprehensive about this kit at first. It is, after all, an older Hasegawa kit, and to be honest, those rarely agree with me. The old Phantoms were horrible, and the Vigilante I'm currently working on is putting up a monumental fight to avoid being built well. I needn't have worried though. The kit it quite basic (not as over engineered as some of the newer offerings appear to be), and has raised panel lines, but on initial inspection and some dry fitting, it seems the parts generally fit, and will go together without a struggle, which makes the raised lines less of a problem. The decal sheet is a new design, and by Cartograph, so it will take considerable effort to run into difficulties there.

The pictures here show what I have to work with.
I've assembled the cockpit tub, which is in fact quite nice even by current standards, and consequently excellent for the age of the kit. Of course, that's when I thought I had a very clever idea, and almost messed up.
To avoid a tailsitter, some noseweight is needed. I usually use lead pellets for that, but they can be a bit awkward to work with. I thought it might be good idea to file down a lump of lead, mix the resulting powder with resin, and pour that into the nose, for perfectly fitting ballast. Problem is, the lead powder and the resin don't particularly like each other, so I ended up with grey mud at the bottom of the mixing cup, with almost clear resin above that. I managed to scoop most of the mud into the nose of the plane, but it was very messy, and might well have ended with resin where it didn't belong. I got lucky though, and only my ego suffered.

2004-06-27
I completed a major milestone in the construction of this kit: the fuselage halves are joined together. Nothing all that spectacular, but it means the itsy-bitsy interior work is over, and the larger scale exterior work can begin. 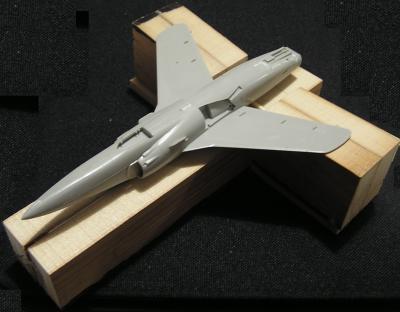 2004-09-03
The intakes and splitter plates went on nicely, with minimal corrections. It was soon obvious though that the wings were going to be interesting. As near as I can determine, they were angled down by about 6 degrees on the real thing, and that means they'd better do the same on the model. Perhaps there are some out there who can stick a pair of wings on a plane at a precise angle without further assistance, but I need some help to pull that off. As a result, my hobby time for the better part of two weeks was spent playing with wood buiding the jig shown in the picture, which will (hopefully) allow me to get the wings on correctly.
I just took the plane of the jig, and I think it worked. A thin seam is visible from the top, but that's nothing a quick rub with Milliput can't solve.
From the pictures of this plane I never realised just how highly swept back the wings were. They say a Vigilante looks fast just sitting on the ramp, but this plane looks like it couldn't possibly imagine not going supersonic.

2004-09-06
It took a while, but I finally found something about this kit I don't like. The main landing gear is a very, very wobbly affair made up of three parts each side, and it's tricky to get them on the plane in exactly the same way. As a result, the tiger lists a bit to port now. I don't think I can fiddle the legs any more, so I'll have to find some way of compensating for the problem by shaving a bit off one wheel, and making the other slightly fatter. I figure I need about 0.4mm of difference in the distance between axis and ground to make it look good.

2004-11-28
Its been ages since I had the chance to work on this kit, and consequently I lost track of things and goofed.
The fiddling with the wheels appears to have gone well, and the difference in size between the wheels is now a fact. I won't know if I got it right until the kit is completed, but so far, I'm optimistic.
I gave the plane its first layers of paint today, taking the new XtraCrylics for a testdrive. The paint seems to be behaving very well, so well, in fact, that I may have to reconsider my rather negative view of acrylics. Masking revealed another issue with the kit. The canopy is so finely engraved that I can't use surface detail as a guide; no matter how firmly I rub down the masking tape, the line between canopy and frame doesn't show. Until I think of a better trick, I'll have to paint canopies like this the old fashined way. Nothing wrong with that, but I'm worried about the possible difference in finish between airbrush and hairbrush, even from the same bottle of paint.
By the way, does anyone remember those seams between the wings and the fuselage I mentioned a few entries back? Well, I didn't, and I was too caught up in painting to see them, and now with a few layers of paint on the plane, they stand out like an extremely sore thumb. I now have to apply putty to an already half painted plane, which is not good, to say the least. 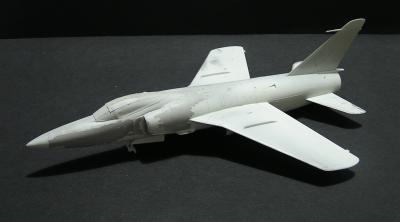 2004-11-29
Oh great! Looks like I messed up the paint job as well. This morning, the paint had more wrinkles than your grandmother. The worst of it is, that I haven't the faintest idea what went wrong. I usually put on several layers of paint over a period of a few hours, and from all I heard, that should be the normal way to do things with acrylics as well. So, either I'm a moron, fate has decided it hasn't picked on me enough recently, or acrylics are as bad as I've always thought. I hope the first option applies, because that's the only one I can fix.
Anyway, I carefully stripped all the ruined paint off with alcohol, and managed to break off only one part in the process. Not bad enough to ruin my day. I then filled up the wing seams, and found myself looking at a very sorry looking Tiger. Hopefully, tomorrows second attempt at painting it will turn out better.

2004-12-16
Guess what? The first botched airbrush job was only the first in a long sequence of blunders and material failures, that I'll probably get a great laugh out of in the future, but not until I've recovered from them. The second attempt at airbrushing the Tiger was as bad as the first. Xtracrylics are definately not ready for prime time yet, at least not in my hands.
So, with number two paint job wrecked, I had to clean the kit again, and this time there was no escaping the caustic soda bath. Of course dunking the kit in caustic soda was not as precise as I'd like, and the inside of the cockpit was stripped right along with the rest of the kit. The canopy conveniently came off as well without further intervention on my part.
The interior of the cockpit was largely done using decals on this kit, and those decals were now lost. Fortunately, I had the presense of mind to make a scan of the entire decal sheet before starting, and this prompted a sidestep to what escalated into the decal creation pilot project.
Once I was done making the replacement decals, I came back to the Tiger, for more mishaps, as it turned out. It started while airbrushing on the white. I over did it, and ended up with teardrops, with an airbrush of all things. I got rid of those as best I could without stripping the kit again, finished the white, masked off everything that was supposed to stay white, and sprayed on the grey. That's when I found out I hadn't covered everything that needed to be white after all. Fine, so be it, I masked off the grey areas, shot more white onto the kit, and found that I'd missed a bit again. So, I reshot that particular bit with grey. When I removed all of that masking tape, I found that the area of grey I had had to correct wasn't the same colour as the rest of the plane, so I masked all of the white yet again, and shot on some more grey. I then masked off the bit that weren't supposed to become silver, and got overenthousiastic, which I only noticed while putting on the decals, at which point I had to do the edge of the tail by hand. After all that colourfull airbrushing, I put on a coat of gloss varnish, to even the surface for the decals. Halfway through the job, the airbrush managed to find some grey left in its innards, and spat it out on an area of white (of course, not on something already grey). So I had to do more corrections in white.

After this painting frustration, I started work on the decals. The decals were, as I'd expected, very thin, and perfect fitting. Unfortunately, they also proved extremely difficult to move around on the model, and the white is not opaque enough, resulting in a visible line running through the stars-and-bars on the sides where they sit accross the white-grey edge. Worse, the orange ink used apparently responds badly to MicroSol. One of the flashes on the nose was treated with this, an the next day there was a teardrop of orange underneath it, presumably carried there on a drop of MicroSol that dribbled down from the flash. More corrections in white called for. Fortunately, none of the other decals showed behaviour like this, but I did not risk using MicroSol on any more of this sheet. Considering my clumsy handling of the paintjob, I guess I should be glad I 'only' misaligned one decal (and found out when it was too late to correct, of course).
This evening I cleaned the kit, and applied satin varnish. This served me the final misfortune, in that this also applied instant, though fortunately mild, yellowing to some of the decals.
So, the Tiger is now finished, and although brand new, it already shows signs of rather extensive repairs. The results can be seen below. One good thing about this though: the plane no longer lists to port, so my little fraud with the diameter of the wheels has worked. If you look closely at the front view picture, you'll notice the left wheel has a visibly larger diameter than the right one, but that's all that's left of the undercarriage problem. This kit definately deserved better building than I gave it, in fact, other than the undercarriage, none of the problems I encountered came from the kit itself. Still, it didn't come out all that bad, and at arm's length it has become a nice looking bird.

2005-03-27
I feel I owe the folks at Cartograph an apology. It now appears the runny orange wasn't a problem with the decals at all, but rather some residue from the Microset used. Ah well, ya lives an' ya learns.