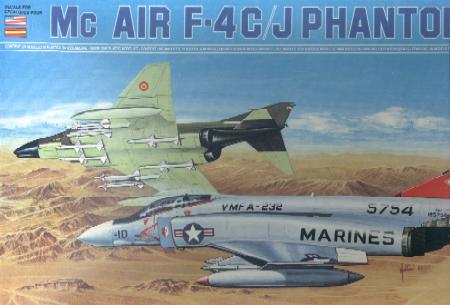 I just got a reminder of why I always used to have half a million kits in various stages of production. One can do only so much to a given kit before it needs time dry. When you don't have loads of time on your hands, that's just fine, but I got lucky and ran out of kit before I ran out of time for a change, so off to the stash for a new vicim I went.
I came back with an Esci F-4C/J, which despite the name is really an F-4C only kit. By the looks of it, this is a very well made kit. Decals are included for an F-4C of ala 12 of the Spanish airforce, and an F-4J of VMFA-232. Obviously, I chose to use the Spanish set for this kit. Ordnance consists of the usual 4 Sparrows, 4 Sidewinders, and wingtanks.
The kit will be built with some parts that did no come out of the box. The ejection seats will come from Aeroparts' collection of white metal details, the Sidewinders on the inner wing pylons will be replaced with a pair of MERs I copied from somewhere, loaded with Mk82 bombs from the spares bin, and the forward pair of Sparrows will make room for a single ALQ119 ECM pod. 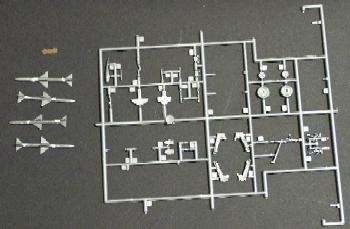 2004-01-18
After some initial construction, I must say that I'm impressed with the kit's fit. I think that adding a few drops of glue and then shaking the box vigourously might well be enough to produce a completely built kit.
Still, there's more than just out-of-the-box construction involved here. The cockpit is extremely bare, and worse, this will show at all but the most cursory inspections. Some scratchbuilding and correction will be required, even if you're not planning to superdetail the kit. The triangular bits against which the intake splitter plates rest on the outside are huge (and visible) wells on the inside of the rear cockpit, and will need filling. Also, there are gaps between the side consoles of the front and rear cockpits, and again, these are easily visible, and need to be filled up with something. Mind you, I'm not complaining. I like the kit so far, but its probably something like 20 years old, and we've all become better nitpickers since then.

2004-06-16
I filled in the splitter plate gaps, and extended the rear cockpit consoles far enough forward to connect with those of the front cockpit. This isn't right, of course, but it's still a lot better than the gaps that Esci put there. I also cleaned up the bombs and missiles, and assembled the wings. Then it was time for a disappointment: the cockpits are much too deep, and as a result, the ejection seats, and by implication the crew's heads, barely clear the sides of the cockpit walls. I'll need to put in something like 2.5 to 3 millimeters of extra floor just to stop it from looking ridiculous. As it was late when I found out about this, I decided not to work out what that s going to do to the proportions of the cockpits as a whole until the next session. I fear very rigorous measures may be called for.
I've had some second thoughts about the weapons loadout. I'm not certain Spain ever used this ECM pod on the Phantom, so just to be safe, I'll dump it for two more Sparrows.

2004-06-19
That cockpit is going to take a lot of work before it becomes presentable. To be quite honest, I don't really need another major surgery kit on my hands right now, so this kit is going off the production line for a while, until the other three headaches are done, and a Fujimi Phantom has had its cockpit built, to serve as an example while I carve away at this one.

2004-06-27
I've found out I was a bit too harsh on the cockpit. I checked some references, and the pilot sits higher on the ejection seats than I'd thought. This in turn makes the cockpits a lot more sensible as they are on the kit, so much of the surgery I feared will not be necessary. This puts the kit back on the active list, although I'll finish the Tiger that too its place first.