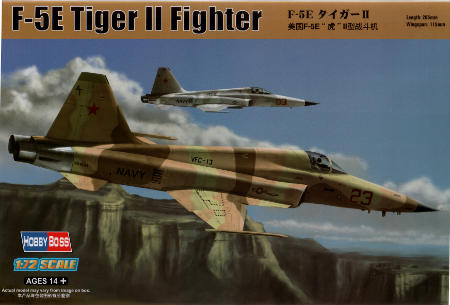 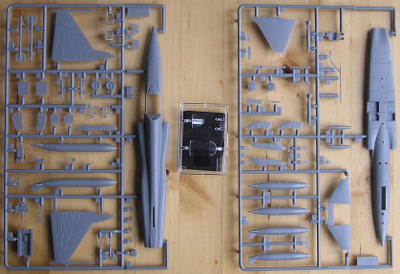 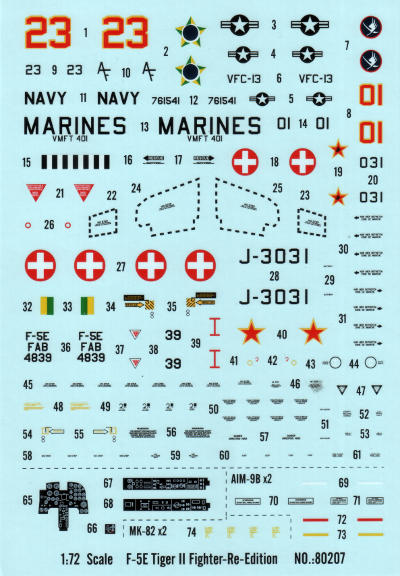 When I started getting serious about the F-5 family, it came as some surprise to me that there really weren't any modern kits of the F-5E. Sure enough, kits exist, but not many. Airfix did one in 1983 which was sort of OK, Italeri did one a year earlier, which was better but still cursed with raised panel lines, but that's about it in 1/72 scale. I then cought wind of a Hobby Boss kit, which was supposed to be a rescribed Italeri, and cheap as dirt to boost. Three cheers for Hobby Boss. Of course, I ordered up a pair of these.
While waiting for them to arrive, I did some further digging around for info on these kits. I found quite a bit, and most of what I found said the same thing: this kit is a trainwreck. Not only had the layout of the parts been changed, introducing fit issues, the basic shape had apparently been ruined. Particular criticism was leveled against the air intakes. Apparently, this kit was a waste of effort, and the Italeri kits the only real way to go. Nasty thoughts all around while I waited for my apparently wasted money to arrive.

By the time the kit arrived, it was also becoming clear that the A and B models were easily found, and even the F-20 would be no problem, but that the E and F models were going to be hard to catch. Finding out just how good or bad this particular kit is, became a priority, so I started a real fast down and dirty build of one of them. A quick coat of grey in the cockpit, a dark wash to bring out the (actually quite nice) detail on the consoles, and a quick scratch build of a 'bulkhead' behind the ejection seat, followed by assembly of the main parts at some speed.
Fit is terrible, especially that of the redesigned wings and fuselage, and some of the smaller parts are clearly simplified further than I'd like, but nothing that can't be dealt with. However.. 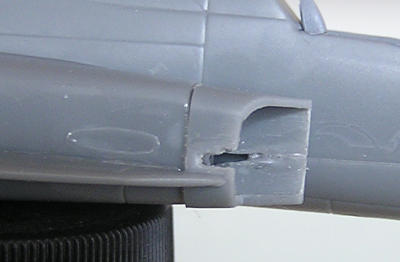 The air intakes are indeed a disaster. The entire fuselage has larger vertical dimensions than the Italeri kit, but at least it looks the part. It should be noted though that the air intakes are just the front end of a larger structure that tapers all the was from the very rear to the intakes themselves. The parts supplied for the intakes are bigger still than the already large fuselage, and have parallel upper and lower edges. This looks completely, totally ridiculous. It's also very tricky to repair with any degree of refinement. So, as can be seen from the picture, I opted for the crude, brute force approach. I abducted the intakes to the garage, fixed a big old hacksaw in a vice, and used it to cut through the intakes except for the last millimeter. I then squeezed the top and bottom together, turning that last millimeter of plastic into a bent 'hinge', and dumped a load of solvent on the front rim. The intakes now had a reasonable taper. Obviously, they were still too thick and too big, but some further rough treatment with sandpaper got them into workable shape. I have some hope for this kit.

Given the somewhat experimental status of this entire build, I'd not yet given any thought to which markings to use. Both to stay on the safe side, and to turn this into something of a challenge, I've chosen to use the bare metal Malaysian scheme for which decals are included with the Italeri kit.

2013-01-18
The kit is now mostly built, and has been given a first shot of primer to make it easier to judge the effects of all the filling and sanding that had gone on so far. Unfortunately, this revealed a whole bunch of problems. Some further smoothing of seams was still needed, as well as some other minor surface work, but this was to be expected. What should not have happened, was that the primer revealed significant variation in surface smoothness. I had read that the plastic was grainy, but hadn't really noticed up to this point. Now however, it was obvious that there was indeed a problem in this respect, large enough to make even SEA camouflage dubious, and anything more monotonous impossible, let alone bare metal finish. I've sanded the problem areas smooth, resulting in green plastic dappled with grey primer in the pits between the grains. I have high hopes the next layer of primer will be sufficiently smooth. On the other kit, I'll start out with priming and sanding before anything else, just do deal with the grainyness.
Despite all of these problems, I'm beginning to think this may yet be the easiest F-5E to build. True, there's a lot of issues to deal with, but I believe all of them to be manageable, and the general shape of the kit seems OK. I suspect the Airix kit will have as many, though different issues, and while the Italeri will probably have less, both of these will be more difficult to deal with, at least if I want to keep visible panel lines.

later in 2013
As this kit will be completed in NMF, a base coat of gloss black is required. The build stalled for a bit just after this went on, and for months the F-5 was just sitting there, looking cool and slick in it's shiny black suit. I could make a rather strong case that this type is made for the colour.
Still, black was not the plan, and I eventually got around to putting the metal finish on. In doing so, I clean forgot to put on the ant glare panel in front of the cockpit, and some fiddling with black decal stripes and paint was needed to restore it. Other than that little slip, final assembly was uneventful.

Decalling was a little more interesting. Either the Italeri intakes are much bigger that the Hobby Boss ones, or the size of the national insignia decals that go there is just wrong. The decals are also about as flexible as a brick wall. The one shown in the picture made a large hole in my supply of decal solvents before it surrendered.