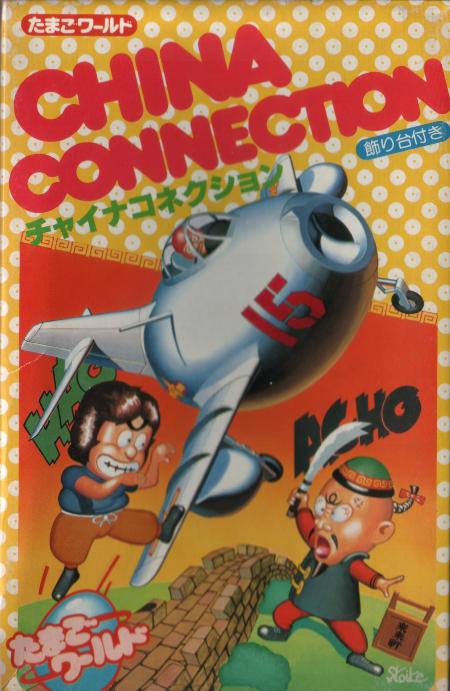 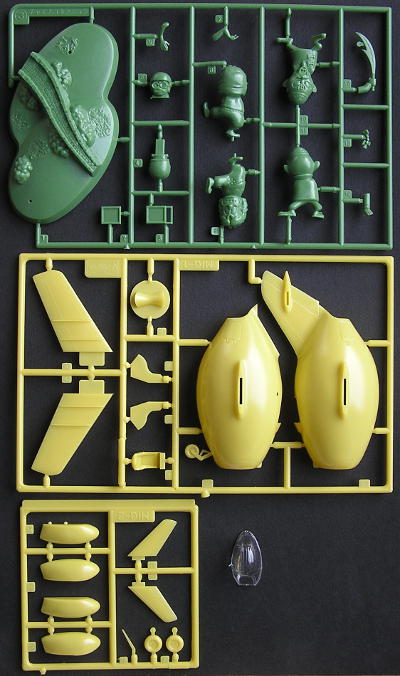 This year's Easter Egg was supposed to be the Phantom. Yep, definately the Phantom. Or maybe the F-16, since the decals for the Phantom are probably shot, and will take too long to fix. Or maybe no Eggplane at all, since my Easter holiday this years ends with the IPMS meeting at my home on May day, and the powers that be have decreed "no eggplanes this time, but stuff flying the red banners appropriate to the occasion". This, I felt, left me with a moral obligation to disobey orders in some creative fashion. So, while a Mig was obviously called for, it would have to be eggified. The stash quickly confirmed that this would pose no problem.

When I bought the Phantom egg on Fleabay, the same seller also had a bunch of other old edition eggplanes, complete with the cartoon vignettes, for sale, so I snapped them up (ok, so I'm a pack rat), and the Mig-15 happened to be in the bunch.
The kit is obviously older than last year's Tomcat, and this has consequences. On the very bright side, of course, is the inclusion of a display base and three cartoon figures. On the darker side, the quality of the mouldings is not as good as with the modern kits, and panel lines, such as they are, are a mixture of raised and recessed. Inevitably, most of the raised lines will fall victim to sanding along the seams. Such sanding is particularly important with this kit, as the Mig is supposed to be natural metal, and while a good natural metal finish looks great, achieving that requires a flawless surface finish. The slightest irregularity will stick out like a sore thumb.
The decals in this set appear to have survived in tact, with little or no yellowing. I'll be playing it safe though, and coat them with liquid decal to avoid surprises. The folks at Hasegawa thoughtfully included decals for the design on the swordman's cap, which may help immensely. Then again, it may not, because the decal is straight, and the cap is angled, so a curved decal is needed. I'm hoping a series of cuts will allow the decal to follow the curve.
Speaking of the swordsman, the designers were obviously not pulling their blows with this figure, as they even engraved the cartoon convention "I'm now really annoyed" open cross on his forehead. I really must remenber to make him just a bit redder in the face than the others, to match his obviously "just short of a stroke" mood.

2011-06-01
Both the IPMS meeting and my Easter vacation have come and gone, so in theory, the kit should be finished by now. In a way, it might have been, but there were some complications.
In general, you might say that the green sprue was friendly, while the others were not. Let's start with the friendlies:

The figures included with the kit are a bit crude, but this is appropriate for cartoon characters, which are in essence crude caricatures of something else. The figures went together easily, with only minimal filling and sanding required. In keeping with the cartoon nature, features are bold and exaggerated, which makes the easy to paint. Just as well, because my skills at painting figures were a bit rusty at this point. As I'd feared, the headband decal was useless after all.
The display base is completely off-scale for the rest of the kit, but who cares about such issues in this context. 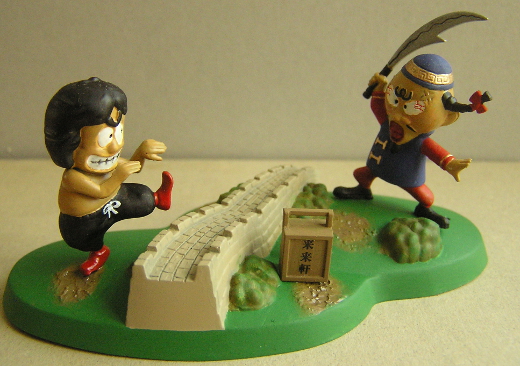 Notice that there is no protrait of the pilot here. I'll get to the reasons for that shortly.
Now, for the not-so-friendlies. Yellow plastic may look really cheerful, but for some reason it is really yucky to work with, and there was quite a bit of sanding to be done, mostly to remove panel lines that had already been half lost due to filler and sandpaper work. Not really a problem, and otherwise, the kit mostly builds itself. Painting, however, is a different matter. I completely screwed up the metal finish this time. The usual primer/gloss black/metallizer sequence went mostly as planned (mostly, it had a surprise for me later), but that's when the trouble started. Work on the draken had demonstrated this was an extremely fragile finish, so I applied a coat of clear varnish over it after a day or so of drying. This did some minor damage to the finish. After that, the decals went on without serious issues, and then another coat of varnish, which totally wrecked the metal finish. The varnish liquified the underlying layers, and in effect, I ended up applying metallizer paint with a broad handbrush. The effects can be seen to the right. This really won't do, and the plane is scheduled for a new paintjob. There was also an entertaining surprise from the airbrush work: somehow, some of the black paint had managed to creep under the masking take, and messed up the canopy. By the time the tape came of, this paint was very well cured, and removal damged the clear plastic. I have some hope Future can restore it, but for now, the canopy is partially opaque. Hence, no portrait of the pilot, I can't see him properly through the fogged up windscreen.
I was just a tad frustrated about all this at the IPMS meeting, so I did some asking around. One of the other modellers had more experience with the metallizer paints, and told me these problems were more or less guaranteed by my clumsy handling of the medium. Apparently, you spray on the metallizer, and let it cure for a week or so. Then, you spray on a special sealant (huh? what? sealant? where did that come from?), and wait at least another week. Only then do you proceed with the rest of the work. We'll see if this procedure does the job during the re-try.

2011-06-13
I mostly managed to de-fog the windscreen with Future, but unfortunately, it's far from perfect. I also sanded off the decals, as I don't want to risk them doing anything funny when the next paint job goes on. I'll have to raid the stash for replacement decals, probably some after market Flanker sheet for the national insignia, but finding the bort numbers could be interesting. 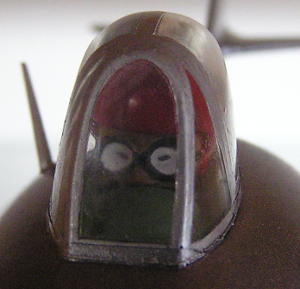 2011-10-30
I've cleaned, re-primed, and re-blacked the plane a few months ago, which means that by now the masking tape on the canopy has me worried. Last week I put on a brand new coat of metallizer, which I coated with the special sealer today. So far, it still looks good, but I don't intend to let anything tough the surface until this too has cured for a week, and the whole thing given yet another coat of varnish.
Fate threw some very usable bort numbers my way in the form of some glider kit promos (thanks Revell), and the national insignia were indeed found on some unsupecting Flanker, so decal wise, I should be in great shape.

2011-12-31
The metallizer survived the further varnishes, and I'm satisfied with the paint and final assembly. As can be seen on the right, the pilot's windscreen isn't the clearest in the business, but he's doing his best to see what he's doing. The stolen national insignia went on without a glitch, but the Revell decals really didn't want to say goodbye to their backing paper. It took well over ten minutes of soaking in lukewarm (at first, quite hot when I started getting grumpy later on) water to get them to move. I've had slow starters before, but this is ridiculous. I hate to think how long it's going to take to do the gliders once I get started on those. Handled well enough once they were on the move though. 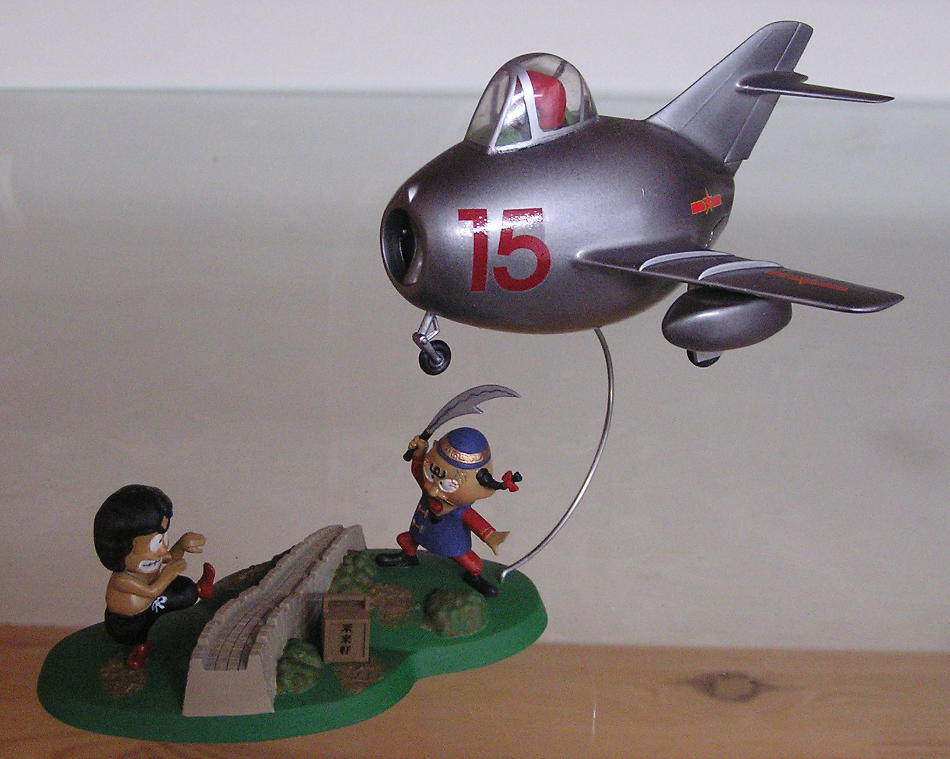