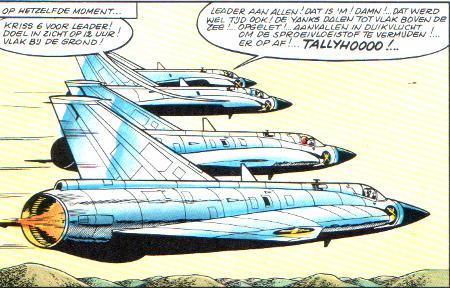 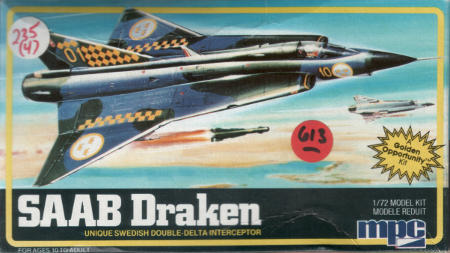 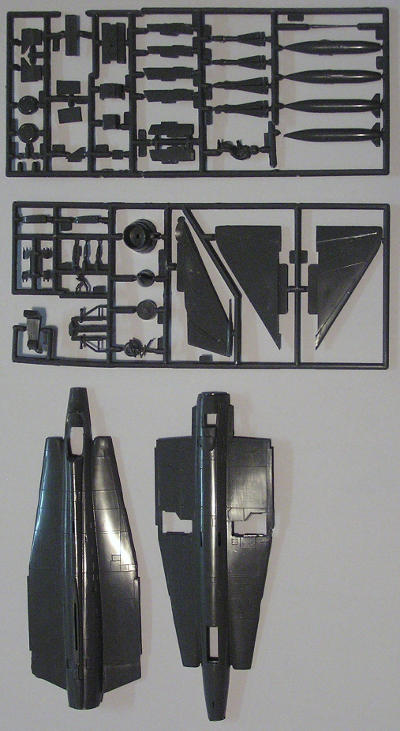 Some of the more interesting markings used in the Buck Danny comics are the 'pirate' markings used by archvillain Lady X on several occasions. My incomplete collection of comics shows several different types in these markings, from which the more interesting choices would be the Fiat G91, Saab Draken, and (if I've identified it correctly) the Beagle Basset. Of these, only the Draken was on in the stash, or more precisely, in the disposal bin. The G91 actually had nicer markings, but not only was there no G91 in my home, none was available for sale at the time either. So, Draken it was.

The Draken in queston was the old Airfix kit, in an MPC boxing. As is to be expected of an old Airfix kit, the plastic is relatively soft. Some people hate this, by rather like it, as it gives me a lot more control when working it with a knife. I usually like these old kits, but in this case, the quality of the plastic is just about the only nice thing I can mention about it. Fit was dubious in many cases, and the so called undercarriage was so clunky I decided to build the plane wheels up for the first time in ages. Well, since 2003, actually, when I built the Monogram A-5A with the wheels up for exactly the same reason. Landing gear doors didn't fit worth a damn either, but that was fixable with sandpaper and filler, while airbakes were dropped entirely and the wells filled in with putty. Fortunately, the comics invariably show the drakens without external stores, so the tings under wings could be ignored. And did I mention sinkholes in incovenient spots?

If one ignores the various bits and pieces that might hang out from under the plane, the kit consists of relatively few parts, so construction was straightforward and easy. Painting was a different matter entirely. I'd rarely done natural metal finishes in the past, and none that came out really well. It was also going to be the first time that I tried this with an airbrush. As I have a bottle of Modelmaster Metalizer paint custom mixed to match the colour on a set of decals, and had no idea as to how this paint would behave, I chose to get a more run of the mill bottle and test it on this kit. The paint has some issues, but in general, I'm more than happy with it. I first painted the plane gloss black, as this is what I see the tabletop wargame folks use as a base coat for metallics. They then typically dry brush the colour on, so I decided to imitate this with the airbrush and build up the coat of paint using minimal pressure, and almost no paint. Possibly the best experiment I did the entire year. The paint built up beautifully, and I've since had similar results with other colours and types of paint. I found out the hard war that this was not entirely without drawbacks. Due to the very thin layers of paint I put on, the finish was uneven; I obviously have to pay a great deal more attention to the degree to which paint has built up on various parts of the kit, and I missed the leading edges of the wings completely. With my previous, far more generous settings, this would never have happened, but this does obviously allow for some very subtle effects.

After painting, all that was left was the decals. These had been designed early on in the project when I was a long way from home for work, and more recently coaxed out of the APLS printer. It may be used only rarely, but when I do need it, it's unbeatable. Add a display base from an old MPC Star Wars kit, and the result is quite presentable.