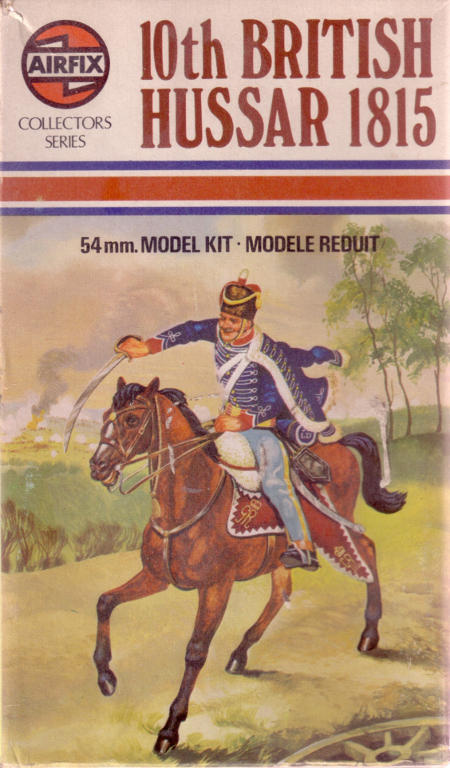 2011-10-30
Work on this kit started a lifetime ago (over twenty years ago, so many people can take that quite literally). All that time, it's been patiently sitting near the workbench, waiting to get some attention again. Given my recent determination to rid myself of half-built kits, the time has finally come to return to it.
The picture below the box art shown the state of affairs as they currently stand. Most of the work was done ages ago, when in retrospect I was winding down much of my modelling activity. A fortunate consequence of this, is that at this time I was passably skilled, and very little rework will be required.
The paint on the horse is another matter entirely. It was painted long ago, but as I've mentioned before, I was never very good at painting horses. Two years ago, I found myself in need of an equine test subject while working on the Birthday horse, and since this chap was lurking just within range, it got picked.

2016-02-28
Once again, the hussar sat there being slowly bored to death for years, until the figure building bug bit once more, and once again, he's going to be used for experiments.
I was originally going to leave all the previously done work alone, but it hasn't quite worked out that way. No matter how I look at it, Airfix messed up one of the right arm positions. The one with the sabre held high over the head works, and for this the entire torso and especially the right shoulder angle upwards. The position shown on the box art either requires a slightly bent arm, or a level shoulder, but the arm is too straight for that (actually, the bend is completely horizontal, while the elbow should have been slightly above the shoulder). This was just a bit too much to accept, so I chopped off the arm and replaced it with the other option.
The torso has been joined to the legs, the head stuck on, and the lot given the usual cleanup treatment and primer. I'm currently in the process of painting the face and hands with oils; we'll see how it turns out on a much smaller scale (and lesser quality scultping underneath) later.
The horse seemed a bit bland, so I made the mistake of putting white socks on it. Although the demarcation between the two colours is quite sharp on a real horse, merely painting the socks white gave a rather terrible result. While I was working on Napoleon's face, I used some leftover ochre to put a very thin wash over the socks, and although the colour is now clearly off, the arms length result is much better. I'll complete the painting of the horse sort of soon, and judge the result once completed. If I don't like what I'll see, I'll strip the lot (which was what was going to happen because of the botched socks anyway). 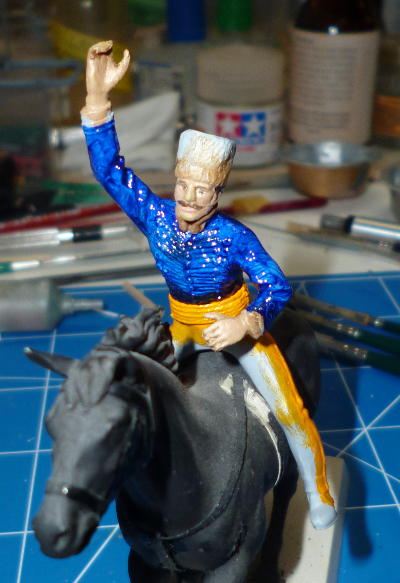 2016-03-04
I've decided to try to finish the hussar using only artists oils, just to get a better grip on the medium. Picking colours with this stuff if hard; the 'samples' on the tubes are useless other than to get the general idea, and the names of the colours are as yet meaningless to me. Not entirely surprising, the tube of "Windsor Yellow, Deep", while a very nice colour, is closer to orange than yellow. I can put up with that for the accents on the hussar, but for most applications, I'd probably have to tone it down considerably. I also find that the paint needs a bit of thinning in normal use to avoid blobs of paste ending up obscuring all detail.
The "Ultramarine (green shade)" was a far better match for the very dark blue I had in mind. When thinned sufficiently to paint well, coverage isn't all that good though, so I'll have to put on an extra coat later. Much later, since this stuff takes forever to dry. Not a medium for those who are in any kind of hurry (in stark contrast to the frustratingly fast Vallejo acrylics).
The much deeper blue near the sash is due to the presence of yellow paint from the sash. Seems like the colour filters are stacking nicely. Whether tis will turn into a problem later remains to be seem; I'm hoping the blue will properly assert it's true colour with an extra coat.
I'm beginning to suspect that, when working on miniatures, oils may work best when applied over a matt base coat of approximately the same colour. I'll certainly have to do something about the yellow on the trousers; the dolman has to become dark blue anyway, so that should be OK, but the trousers are sky blue. I'm thinking about a preparatory layer of "Titanium White" first (in order to preserve the oils only experiment, otherwise I'd just hit it with some Humbrol).

2016-03-05
It looks like the hussar will be out of action for a while; I can still move the paint around after almost 24 hours on the model. This will take a while...

2016-03-11
The paint has finally cured enough to re-coat. The stacking effect remains in full force, but the main bulk of the coat is now sufficiently darker that I think it will be OK, especially after I add more shadows ... next week. The bright side of all this slow drying, is that my little puddle of paint from last week was still in perfectly working condition, and may well survive until next week for my little light-and-shadows game. I'd better pick up a few more cheap palettes though; I can't really use the one I have now while there's wet paint sitting under cover. 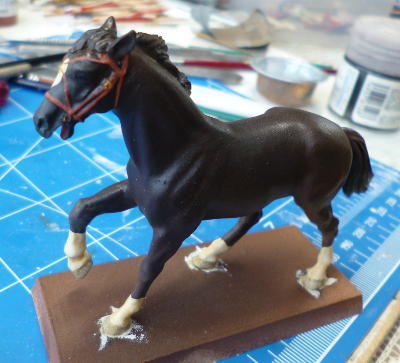 2016-03-29
Another day, another lesson..
I already knew that ultramarine was not fully opaque, and also too bright to resemble the very dark blue I was looking for for the hussar (approximately Humbrol 104). Still, I figured anything would dominate white paint, which I planned to add for increased opaquity. To my surprise, I needed a lot less white to come anywhere close to the mark than expected. The combination of ultramarine and Paynes grey was fairly close to 104 though, so at least I got that right. In the end, I went with just dark blue, rather than very dark, mainly to find out if the paint was now opaque enough to cover the (almost black) areas where I'd overlapped yellow, which it was. I could barely see what I was doing (glossy dark blue on glossy dark blue isn't know for high contrast), so I probably slapped it on too thickly, but on the bright side, that gives me plenty of time to play with high- and lowlights later on; this should stay wet for a while...

2017-01-15
Sometime in past months, I'd painted the trousers with, in retrospect, far too much paint, so that it took ages to dry, and left stripey structure on the surface. Despite that, the colour was also uneven, with the base white shining through all over the place. I didn't feel like stripping the figure after all the work that has already gone into this, so I mixed up a new batch of paint. Last time (if memory serves) I'd mixed Titanium white and Ultramarine, which did actually produce fairly nice Sky Blue. Curious about the difference between Titanium and Zinc white, I used the latter this time. It does appear to be quite a bit weaker than Titanium, which for light colours means the mixture if more intuitive, at least for me. Despite the different whites, I think I got close enough to the desitred colour again. I took care to only put on a very thin, evened out coat this time. It looks like it covered the underlying mess well enough. Big question is how long it will take to dry this time round. I'll be very careful around this figure for at least a week, just to be safe..

2017-01-17
My lifetime supply of thin lead arrived today. I somewhat misjudged the thickness, and according to my instuments the thickness is slightly greater than advertised, which combines to make even the thinnest a bit on the thick side for belts and straps. No problem, really, as that was not the primary purpose I had in mind for it, but it would have been nice.
Since it was experimentation time anyway, I decided to try and flatten out the lead a bit. This turned out to be surprisingly easy; even with nothing more than a thin wooden dowel and my cutting mat as tools, I managed to roll it down to about 60% of it's original thickness, which is the right size for belts and straps. A better quality setup for rolling will be needed, but I'm fairly certain all of the straps connected to the saddle will eventually be lead, as perhaps some of the straps on the hussar. The reins will probably be paper, since that's easier to turn into semi-loose hanging straps.