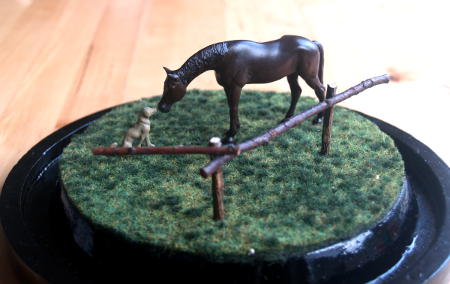 Several months in advance, I ask this girl what she'd like for her eighth birthday. This girl seems to think that when it comes to building things, I'm just about omnipotent. Wish that I were..

She asks for a horse, carved from wood. I couldn't carve wood into something even vaguely recognisable to save my life. This will never work. I tell her so, and get a look that strongly suggests that I'm just being lazy. So she asks for a drawing of a horse and an dog in a meadow. I can't draw worth a damn either, and it is very obvious I've been found severely lacking.
This sort of thing gnaws at the brain. I've got several months to work with, I should able to come up with something. I might be very far from omnipotent, but there just has to be a way of delivering the goods..
The gnawing goes on for about a month, and then, at some unmentionable hour in the middle of the night, I get bullseyed by a brainwave: I've been hacking away at plastic kits for over three decades, haven't I? So, I should be able to do something with that, right?

The gnawing sensation is traded for one of mild panic. I now have just under two months to design the thing, find and obtain the parts, and build them into something that must be both spot on, and robust enough to survive in an environment that contains animals and occasionally rather wild children.
A quick trip to the spares box reveals that the actual horse and dog are going to be the least of my worries. The dog as you see it in the pictures is straight out of the box Historex, and Historex also supplied me with a grazing horse, which 'only' needed to have it's head lifted a bit to come nose to nose with the dog. Ah yes, that, and a decent paint job. My horses have never been really good in that respect, never really got the hang of those subtle colour variations in their coat. To make life just a bit easier, I chose to go for a dark horse, and hoped to pull a fast one on the horse using a very fine mist from the airbrush. I even did a test shot on a different horse, to try out both the technique, and make sure the interaction between the various paints and varnish didn't throw nasty surprises. It didn't. On the test horse, that is. On the real one, the varnish completely destroyed the paint job. The pictures show the second paint job, this one completed less than 48 hours before a very hard deadline.

The horse and dog were about as far as actual experience with building kits would carry me. The specifications on the other hand, also called for a meadow, and a certain degree of hardening. My experience with scenery is just about nothing, and what is there is not something I particularly like to dwell upon. I was therefore immensly pleased to find a ready made field by Model Scene, a Czech company, which is so far removed from the spinkle-on grass stuff I used to make a horrible ineffective mess with years ago that it might as well come from another planet. Add a few twigs for the fence, and the meadow was checked off with considerable relief

That left the hardening. It was obvious from the start that this was going to need a sturdy base, and equally tough, but transparent, cover. Again, I got lucky. I found a thick, glass something (it came with a tripod, in which the glass was supported open end up, possibly for a plant, but I really don't know what they had in mind when they made it) that looked adaptable. The base then had to be designed to tighly fit and hold the glass dome. Some left over plywood was drafted for this purpose, and long, long hours later, I had the display case for the vignette. It might not look it, but the woodwork easily took up half the time that went into the project.