At some point in 2016, I got it into my head to set up my Spanish Phantom with a representative weapons load. I found few helpful images, well, not interesting ones anyway, except for photo's of two different F-4Cs on display. Both carried a loadout including an unknown rocket pod. Further research revealed this pod to be a Matra 166, similar but by no means identical to the more often seen Matra 155. Obviously, I wanted this on the model too.

Wanting it is one thing, getting it is another. Nobody seems to produce these pods, either as aftermarket parts, or included with some model (update: Meng now has them as part of their G-91 kit, but with tubes covers I consider unlikely now). So, no pods unless I got clever. 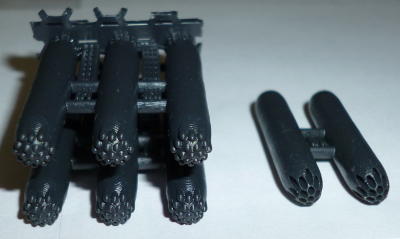 Clever, in this case, meant getting into 3D design and printing. This was a long standing itch waiting for an excuse to get scratched, and now was the time. So, I built up the needed toolchain (mainly OpenSCAD) and got to work. Soon after, the first test prints arrived.

At first, I was quite pleased with the results, but then I noticed they looked decidedly undersized compared to all the Matra 155 pods I had from various sources. Happyness quickly faded. Fortunately, if there's one thing that's easy in the digital domain, it's scaling well designed stuff. Soon after, a now properly sized test batch arrived, and once again, all was well with the world.

2020-01-29
And then again, maybe all was not well with the world after all. A request for Matra 155 pods persuaded me to take a closer look at those, and I found official looking drawings of those pods on the net, which include detailed dimensions. As it turns out, my original dimensions were mostly correct, and it wasn't my 116 pods that were undersized, it was all those 155 pods that were rather seriously oversized. The only 155 pods anywhere in my collection that were correctly sized, were those that came with the very old Hasegawa Harrier, pods which I'd always ridiculed as completely mis-dimensioned. They aren't correct (too long, in fact), but they are certainly some of the best out there, second only to the Fujimis which are actually pretty good. Needless to say the dimensions were quickly restored, and correct dimensions were used on the 155s from the start.

2020-04-14
I find myself having to take care of my mother's cats for a while, and the furballs need a bit of company almost as much as they need their food. That leaves me with little more to do than be bored out of my skull in someone else's home, which makes me cranky, which is bad for me, the cats, and just about everything else within range. Then, I realised that the computer I recently built her was quite likely more powerful than my own main system, and should be more than adequate for 3D work. Some quick fiddling with the machinery later, I had myself a suitable distraction for my catsitting expeditions.

Inevitably, that's where I got ambitious. The 116 and 115 aren't the only Matra pods for these rockets, there's also to smaller F2, which holds only 6 rockets, and the whopping big F1, which holds 36. Those had to be added to the mob, of course. With that many types in the mix, cut-and-paste becomes a pretty poor way of coding variants, so a lot of effort went into cleaning up and restructuring the underlying code.

In addition to the new pod types, there's also the issue of how they appear. Pictures are a nightmare. Some show no sign of the rockets themselves, others have them just visible, yet others have them sticking out very prominently ahead of the nose cone of the pod, and there are also versions where the rocket tubes appear to be covered. So, lots of variation, that needs to be accounted for without reducing the code to total chaos. Long and boring story short, a good week into this, and I was at the point where I felt it was time to order up a test batch. Costly mistake, in retrospect, as I discovered a whole load of things that were wrong with the designs at this stage.

2020-04-25
While waiting for the test shots to arrive, I kept tinkering with the code. Remarkable what a mess this can become if you start out not really knowing what you're doing, like I did. Still, the cats like the company..
I can never resist digging out more information about the subjects at hand, and in doing so I discovered that some of the designs were messed up. 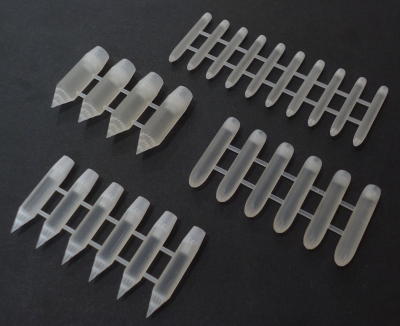 The 155 pods are actually quite sound. All they need for correctness is to change the position of the rockets in the loaded state, making them invisible but blocking the tubes. I also intend to look into adding some detail to the tail ends of the rockets, which are visible from the rear end of the pods. It won't show at the smaller scales, but should make a small difference at larger ones, and besides, I'll know it's there. I'll have to add some panel lines between the main body and the nose and tail caps (this applies to all the pods), and I want to look into doing the frangible cone a little differently.

The 116 pods are also rather nice as they are, but I've replaced the way the nose and tail cones are formed. Minor changes, but they'll improve the overall effect. I've discovered the way I blocked off the tubes in the variant with a frangible cone over the front is wrong, which will need fixing.

The F1 pods are a mess. Somehow I'd managed to miss the fact they have a hump on the back. A rather excellent walk around of a pair of Libyan Mirage F1 planes on britmodeller set me straight, and also provides info for a lot of little extra details.

The F2 pods are entirely too long, and the shape of the nose cone is wrong. This has now been fixed, and only the general updates remain to be done.

All in all, half of the test batch is headed straight for the junk pile (I might be able to save the F1 pods, question is whether I'll feel like making the effort). Still, looking on the bright side, it all came out as was to be expected from the designs I submitted, and the other half, while not perfect, is certainly good enough the use.

2021-05-21
The general updates have been done on all of the pods. A test set of 155s shows that as far as I'm concerned, these are now done. The same goes for the 116 and F2, although that is as yet by extrapolation rather than from test shots. The F1 pods warrant some further detailing, but that will probably have to wait until I actually need them.