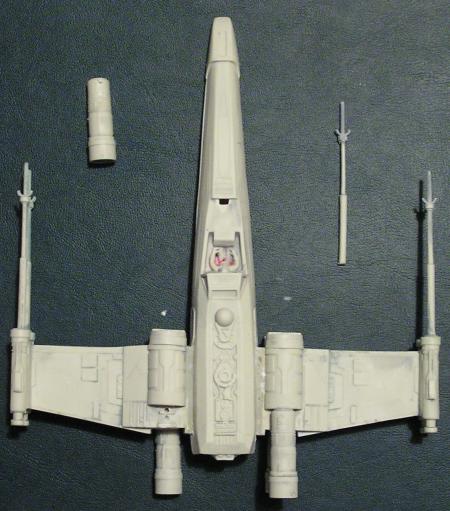 If this isn't the saddest excuse far an X-wing kit, I really don't want to see the other contenders. Released by MPC in or shortly after 1983, it consists of a small number of ill fitting pieces that supposedly snap together. The only way to make the fit even remotely passable is, as usual with snaptites, to remove the locator stubs and hand fit the parts yourself. Even then, the wing assembly, which is supposed to be moveable, is impossible to line up correctly in the open position, and in the closed position shows gaps of 1,5mm between the wings, and at least twice that between the wings and the fuselage. Panel lines are raised, of course, making corrective surgery a pain. The undercarriage doesn't deserve that name, and is supposed to be stuck into the bottom of the craft without any indication of where it is supposed to be stored; the kit would have been better off without it.

Now, to be honest, I saw most of these prolems coming before I even started the kit, or even bought it, for that matter. However, it came in on great big box with three other fighters, which unlike the X-Wing were, at that time, unavailable in any other form. To my considerable irritation, this is still the case for the Y and A-Wing types that shared the box, although the Tie Interceptor and X-wing are now available as true kits, rather than unassembled toys like this one.
That might explain why I bought it way back then, but its no excuse for actually working on it. I started working on it as a support project for the Viper and Enterprise. On screen, spaceships tend to appear almost white (well, those of the good guys, anyway). White, though, did not seem to be a good colour for them. There's only one white, and its too extreme a colour for surfaces this large, especially when its not really supposed to be exactly white. So, I needed a light grey that looked good, and the only way to make sure of that, was to actually paint something in it. That's where the X-Wing came in.
After considerable effort, I had the plastic in a shape where I decided any further effort would be a waste of time for what was no more than a glorified paint sample, and I shot a green and grey paintjob onto it. It looked quite nice actually, except in the places where the green betrayed me and peeled off, taking the grey with it. Still, the grey passed the test, so I guess this all served its purpose. I stripped the failed paint off the kit, resulting in the status you see in the picture.

The kit now has an uncertain future. I might one day finish it with green or grey squadron markings, or I might end up shooting grey primer from a rattlecan on it, slap on the decals, and hand it to some unsuspecting kid. I might even get ambitious, and convert it into a Z-95 Headhunter, as a sort of scratchbuilding with a prefab skeleton project. And then again, I might decide its overstayed its welcome, and just redirect it to the dumpster.

2004-03-18
Right, that does it. Yet another session of finding more problems that I'd just fixed, and not enough info available on the Headhunter to make it worth while. The Imperial Gunnery School wouldn't even pay for shipping, so I just tossed it in the trashcan.