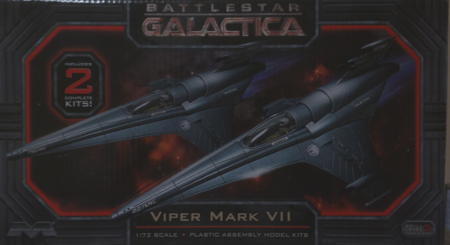 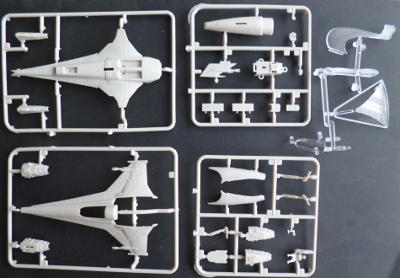 Talk turned to the Moebius Models 1/72 BSG Vipers at the IPMS meet last week, and as a result a bunch of them arrived here a few days later. Nothing like a brand new toy to get the juices flowing, so my pair of Mk VIIs went straight to the bench. I'm spoiled rotten by the Fine Moulds and Bandai Star Wars kits of course, but I have to admit the Moebius Vipers were something of a disappointment. Basic and rather crude, I'm afraid. The large locator tabs strongly reminded me of certain snap-tite disasters from the past, so there was a certain degree of sinking feeling detected.

Fortunately, this is not one of those dreadful toys disguised as models, so at least fit turned out to be fairly good. About half an hour's work left me with an almost complete viper. I won't be using the landing gear, since it is simple UGLY. That's not so bad though, these ships were designed to look good with the gears up, but they all look kind of goofy with the gears down, a trait shared by many SF designs, and Moebius have included stands.
Quite good enough for a quick build beginner's kit, although rather overpriced at 18.50 euro per ship (actually 37 euro per pair) 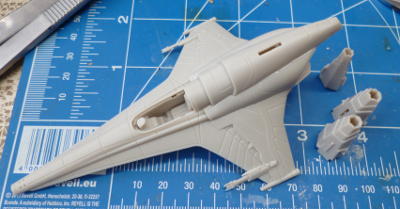 After taking the pictures, I completed the engine cluster, and tried to insert it into the rear of the fuselage, as per instructions. No dice. The mouth of the cavity into which the engines are supposed to go it considerable smaller than the engine cluster. Some rather excessive use of force resulted in the join between the fuselage halves tearing loose before I could snap in the engines. So much for my plan to paint the ship and engines separately and join them at the very last moment.
This is as far as I'll take construction before dealing with some of the nastier joins, so it's filler and sandpaper time at the Viper factory.

2016-03-28
The vipers are now in the shed (..scary thought, vipers in the shed...) while the primer dries.
Since the landing gear is such a disappointing affair, it's perhaps good Moebius included a pilot figure. Sadly, this is not the greatest figure ever, in fact, it's a roughly human blob whose only notable details are the (correct) odd shaped helmet and the, how shall I put this, generous chest padding. Why they bothered including markings for Apollo's machine is beyond me, since this can't possibly be him; another female pilot besides Starbuck would have made more sense, or a second figure, of course, or rather less padding to make an ambiguous figure. (the 1/32 kit includes parts for either gender pilot).

2016-03-29
The initial coat of primer revealed very few remaining problems, so once again, the Vipers are in the shed while the final coat of primer dries. Although very basic, it's beginning to look like these will turn into rather nice models.
The engine modules might prove to be a handful to paint (masking is going to be interesting). In the "official" markings, this is no real issue, a bit of metal grey overspray on gloomy dark grey should be easily fudged, but there's no way I'm going to do both in the official depressing style. Number two is going to be considerably more cheerful, which means the engine painting issue is on the agenda for real.

2016-06-29
I've been inactive for too long, and the large plane GB is about to start, so I needed some light practice to get back up to speed, and I need to make room on the bench. So I picked up the Vipers again.
The gloomy grey is basically complete; all it needs is some matt varnish to take the ridiculous shine off and to fix the decals in place.
The second kit still needs some work; touch up to fix the bleed under the masking tape, a spot of blue, and quite a bit of gunmetal at the back.