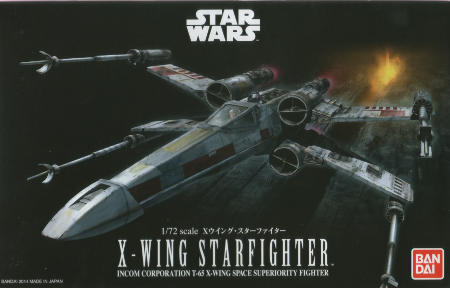 Having been kept from the bench for weeks by all sorts of circumstances, I needed to build something, right now. I'm not usually a blitzer, but it was time for something at least close to that. A while back, I bought some of Bandai's new snaptites, but had never gotten around to building one, and I was curious as to how good they really were, since they got excellent reviews. One of their X-wings had recently snuck into the stash, and since I needed a test subject, this was going to be it..
Inside the box are five sprues, ranging from one with only a single piece, to some fairly big ones, one of which combines four flavours of plastic. Bandai are trying to take the old "moulded in colour" concept a bit further, and have come up with these multi-colour sprues.
This kit will be quick, and out of the box, taken to it's extreme. No glue, no paint except where indicated by the instructions. I want to see the raw results for this test.

The parts actually fit together very well, and without all the usual chemicals, this is a very fast build indeed. You have to pay very close attention to the instructions though; the X-wing has a considerable number of almost identical parts, and it's easy to get them mixed up. The folks at Bandai have taken this into account, however, by making the tabs and slots slightly different as well, so without resorting to excessive force, it's almost impossible to get it wrong. I wouldn't recommend finding out what goes where by trying all possible combinations though..
The cockpit and pilot need some paint, and the orange flight suit is taking it's time in drying, so other than a coat of black inside the cockpit, this is as far as I'll get today. I should have a complete X-wing by the end of the weekend though.
Complete is this case is a relative phrase. It should be complete OOB. However, Rebel Alliance kit has a hard life, and some serious dirtying up is called for, if only to bring the otherwise rather dull "overall plastic" finish to life a bit. This kit will supply a test target for that sort of thing too.

2015-12-06
It seems snappers have come a long way since many of us looked at them. These are no longer the (not so cheap) clunky toys I at least remember from last century, these are serious models, with some extra effort put in to make them buildable to a reasonable standard by a complete rookie without our arsenal of tools and chemicals. Kids and casual builders or those that don't really care about the build process can do them right out of the box, the more dedicated builders can fix parts permanently in place with a lick of cement, fill up the minimal seams with a dab of filler, and if so desired AMS the heck out of them as though they were 'normal' kits.
This 'as wide as possible appeal' philosophy is most clearly expressed in the colour parts: you could rely on the different colours of plastic, combined with the stickers included to get a decent result, or use the decals also included (that is correct: all markings are supplied both as stickers and as decals :grin: ), or cement, fill and paint the whole affair without regard for the different plastics, and again finish with the decals. For the latter case, decals are supplied for the coloured panels, so here you can once again choose to go hardcore and mask-and-spray the paint job, or to spray a base coat and decal the non-white bits. 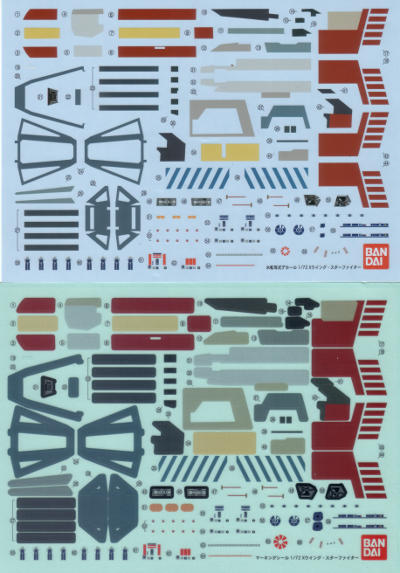 Bandai have, I feel, somewhat overestimated what can be done with decals though. The entire paint job of the Astromechs is included as decals, but I doubt these will work; just too many complex curves involved, along with quite heavy surface detail. I'll take it for a spin, but I think I'll be better off just painting these on. More worrying, it looks like the red ink in the decals runs when exposed to Mr Mark decal fluids (I chose to use those since they seem to be the default in Japan)
There's been progress with the build as well. First up, allow me to introduce one of the pilot figures included.
Only the flesh tone, orange, grey, and black have been painted, the white is just bare plastic, while the visor and the markings on the helmet are decals.
The cockpit interior is again mostly decal, over a painted black base and a bit of drybrushing.

What remains is lots and lots of decals. Only one set is supplied, for a mint condition Red 5. Finemolds supplied markings for more ships, and seriously weathered ones at that, but I mustn't complain.
The canopy is a bit springy, I might put a drop of Clearfix on it to stabilise it before decalling on the frames.

2015-12-16
Not much logging for a while, but not for lack of activity. Lots of relatively large decals, and those take some doing, mainly due to setting times, first of the decals, and then of the solvent, and the need to do this a few at a time, especially where the decals are directly next to, or on top of each other. However, this is now done, and the OOB version is ready for showtime.
There is a single drop of Clearfix in there, and some paint (mainly gunmetal, and whatever went on the pilot); other than that, nothing that wasn't in the box.
I'll run thin cement into some of the cracks, and onto the parts that have a habit of slipping loose later, and then start work on getting this plane a bit dirty; this looks far too clean for Rebel Alliance kit. Sloppy buggers, the lot of 'em.. 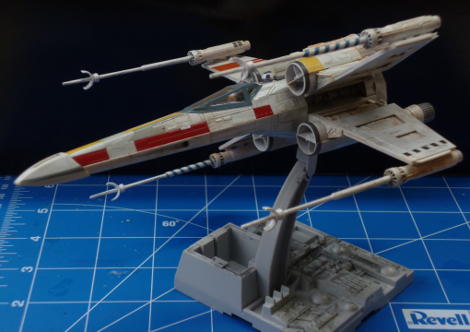 2015-12-20
Looks like getting things dirty might not be so tough after all :)
The kit suffered the following abuse:

The varnish deepened the colour of the pastels, so although the pictures don't really look that way, I feel I might have overdone it a bit (this implies there will be no further weathering on this one, and that it is now officially finished). I like the ochre for rust, but it's a bit too red for what I had in mind for this model; I'll have to blow another Euro on a duller colour. I like the way the mixture of pastels works though.