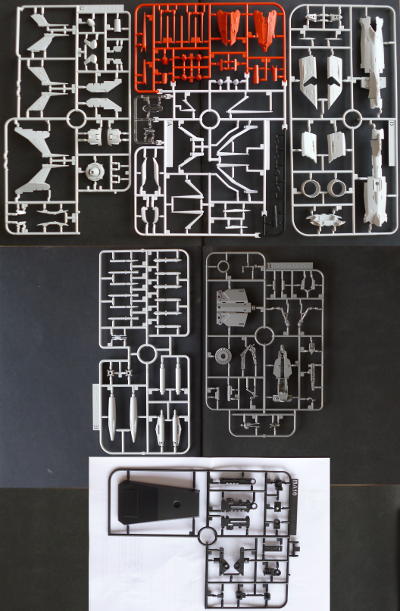 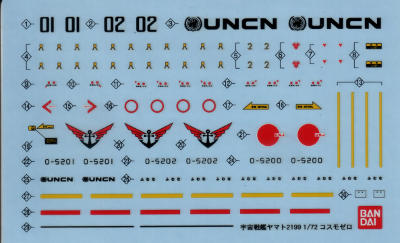 A remake of Space Battleship Yamato ran in 2012, and to go with that Bandai did a remake of a load of their related kits. I have both the Zero and the Falcon, and I'll deal with the Zero first. Maybe the Falcon will follow shortly, maybe a decade from now. Fuzzy business, the future :-D

There are two copies of the ordnance sprue, allowing the Zero to fly into battle armed to the teeth and then some.

The kit, as seems common with Bandai, is designed to be build with minimal cement and paint. Given my earlier experiences with their Star Wars I expected a pretty much perfect kit. Sadly, this turned out to be false, and the kit is merely incredibly good, and that's a problem for the minimal cement and paint concept; once you have to start even the slightest work with fillers, you're all but forced to paint the whole thing. Unless, that is, if you decide to go a bit crazy and use disolved sprue for filling. I've yet to decide how to handle this.

Another artifact of this approach is that, to a large extent, the plastic determines the colours of the model. The show has (at least) two Zeros on the ship, and they carry different paintjobs (both shown on the box art). For models like this, that means the only way to produce kits of both is to do production runs in different coloured plastics, which Bandai did. Mine is not the main character's ship, but that of secondary character Akira Yamamoto, who promoted herself from beancounter to fighter pilot through some rather irregular methods (read: steal a fighter and demonstrate what she could do with it), simply because she was qualified and didn't sign up for this trip to count beans. It might have helped that the CAG pulled something very similar right at the start of the series...

As some painting was likely to be inevitable, I 'primed' the sprues with matt varnish, and got to work. So far, I've only dabbed some paint on the cockpit, to bring it alive a little. The pilot figures, both seated and standing, have been re-primed with white; while dark grey is the best overall colour to use for the figures, and so what Bandai used, this will make it next to impossible to do the face and hair right without plastering on an inch of paint. 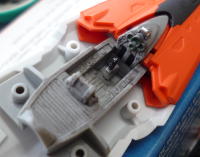 The kit offers the posibility to display the model in flight, wheels down with the ventral fin folded for taxying, of wheels down with ventral fin, wings, and nose folded for stowage. The folded nose just looks daft, so that's out, but the result of this option is far too many parts around the folding mechanism that are just shy of perfect. Some cement was needed to obtain any kind of stability, and I fear some filler may be called for, although I haven't tried anything along those lines yet.

The main bodies of the ordnance supplied are also showing join lines; I have yet to decide whether to simply use filler and paint them up (no problems with colour matching here, as these are separate entities from the ship itself), or to get creative with sprue. 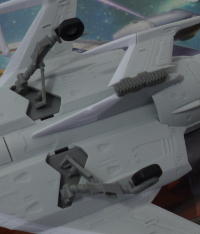 I was planning to do this model wheels down and only the fin folded, but I'm less than impressed by the undercarriage and fin fold mechanism. I'll yank the relevant parts off again, close up the wheel wells, extend the fin, and put the lot on the provided stand. When having second thoughts like this, snap tite construction rules.

The white leading edges of the wings had to be fixed with a bit of cement, and these's a bit in the nose section, but otherwise, construction so far has been dry. I'll probably be picking some things apart again to strengthen some joins with cement, and to allow access for some spot painting.

Strangely, the canopy is a bit of a weakness; the reference material shows strong, greenish tinting, but the parts in the kit are completely clear. I'll have to fix that shortly..

2018-06-03
I decided to go with conventional filler for the things on the wings. The first bits are curing and shold be OK. I'm a bit worried about the wings of the missiles though; the slots on the bodies they fall into are too wide, and will all need work. Work on fragile bits in cramped conditions. This will take a bit of doing.

2018-06-14
I've been puttering about with the things under wings for a bit now, and I'm beginning to think I'll be better off leaving them off, or installing only the fuel tanks on the wing stations. The rest of the stuff just seems off on the Zero. Some craft look good loaded for bear, others are better of (almost) clean, and the seems seems to be one of the latter. Maybe I'll transfer the large ground attack rockets to the Falcon.

2018-06-16
OK, we've had a bit of a disaster here...
The canopy of these craft is heavily tinted green, while the parts supplied are beautifully clear, but colourless. So, I whipped out the airbrush, and gave it a shot of Alclad clear green. Note to self and anyone else here: don't. This stuff is way too hot, and crazed the plastic. I have no intention of giving up just yet, but I don't like the odds of ever getting that canopy cleared up again. I may well have to write off the kit..

2018-06-17
Poor Yamamoto-san. After all that trouble getting to flight status, some clumsy mechanic wrecked her canopy. Least I could do was paint her up properly :-)
Previously mentioned canopy is good and truly shot. I might be able to polish up the rear half to something workable again, but recovering the front section will probably involve polishing the remains to the point where they can serve as a master for a copy in clear resin.

2018-06-26
Well, it wasn't quite so bad. After repeated attacks with various grades of sandpaper, toothpaste and varnish, I've managed to get the rear section acceptable, and the front bit is now soaking off the last bits of toothpaste; a solid coat of varnish ought to do it now.
On the assumption that all is not lost, I've started adding cement to some of the more dubious joins, starting with the big 'ol orange nose. Some filler is really needed here and there, and I don't feel like having to paint the whole affair, so the current plan is to mix up Vallejo filler with a slightly darker orange/red, and do filling and shading in a single pass.

2018-06-29
Closer evaluation of the nose spike has made it very clear my plan with coloured filler is out. Of course, this means I'll have to actually paint the nose. Not what I had in mind, but it's that, or letting the kit win...

2018-06-29
The transparencies really hate me. I got them cleaned up to a reasonable degree, but that still left the tinting that started the whole mess. I got me some brand new Tamiya transparent green, thinned it down with IPA, and shot it out the airbrush. Fortunately, my target was some scrap clear plastic. After being hit with the paint, it was a lovely green, but also frosted. No good.
Fine, there's always the hairy stick to fall back on. No success either; getting an even coat is impossible. A single coat will stripe, attempting multiple, thinner coats just tears up the previous coat as soon as the brush approaches the part.
I've got one last ditch trick I can try, repeated dipping in highly thinned paint, but if that fails, a sort-of-clear canopy is as good as it will get. 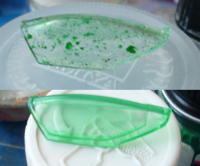 2018-06-29
My new plan for the canopy is to mix up a cocktail of Tamiya transparent green, Humbrol Clear, and perhaps some alcohol, and see what that does (on some scrap first, of course..)

2018-06-29
Since nothing in the intended mix is alcohol proof, I skipped the test. As shown in the top part of the picture, this was a useless mixture. Dunked the whole mess back in the alcohol bucked while I fumed and plotted revenge.
It then occurred to me that I had green pigment paste for colouring PU resin in the workshop. The warning label told me this was based on an alcohol like solvent, so I dumped some into a new batch of Clear. It seemed to mix well enough, so I cleaned up and dunked the canopy yet again. Two more dunkings later, I'm declaring victory.
The front transparency isn't quite this nice, due to more structural damage, but it should do.

2018-07-01
Orange went on, masking take came of, and I'm still cheerful.
I'll leave the paint to fully cure for a few days, then start work on decals and a bit of spot painting. Unless fitting the canopy throws up an issue, this should be well under control. 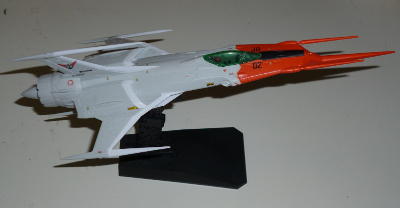 2018-07-05
The decals are on, and drying. They'll be hit with Daco medium solvent in a few stages later today and tomorrow should see varnishes and touch up.

2018-07-06
The Zero is all but done. The canopy is no longer properly clear, but given it's history, I won't complain. The green, at least, turned out ok.

2018-07-07
The Zero is done. Maybe...
I'm still debating whether or not to risk a dark wash to bring out the surface detail. Either way, by tomorrow this will be completed, either with some better pictures, or with the results of the wash, depending on how lucky I'm feeling. Time will tell..

2018-07-08
I'm officially chickening out of the wash. Too many ways for this to go South, and I have no paintmule available for testing (mine all have crude raised detail). I may revisit this kit later, after the technique I had in mind is more properly tested. 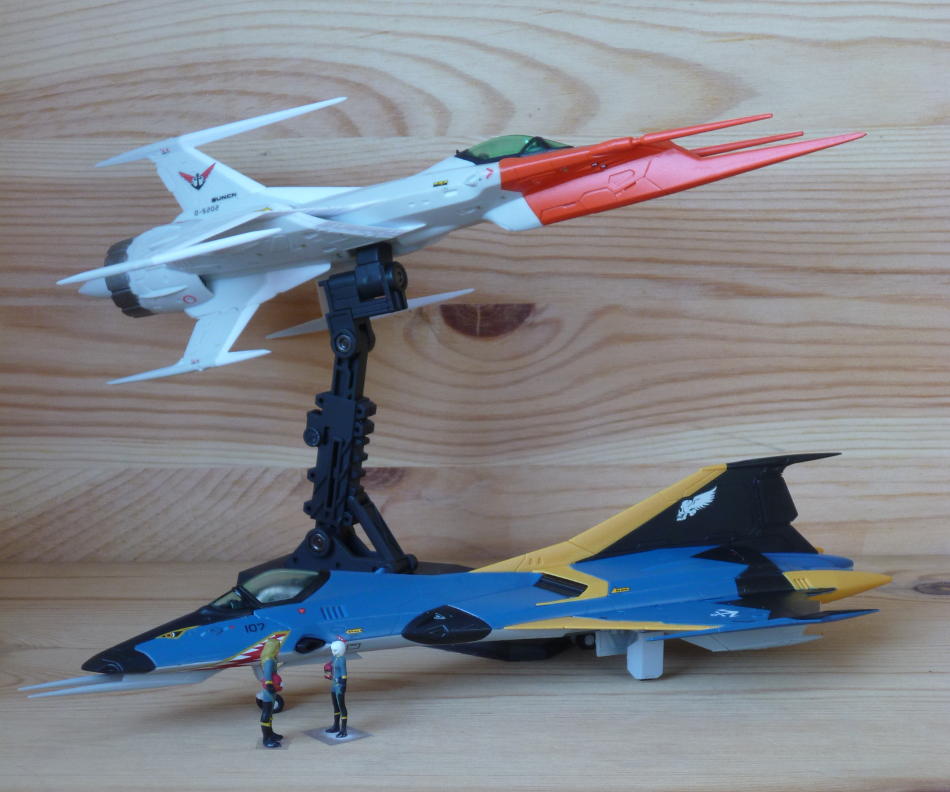