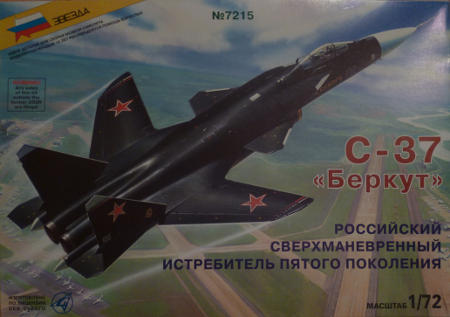 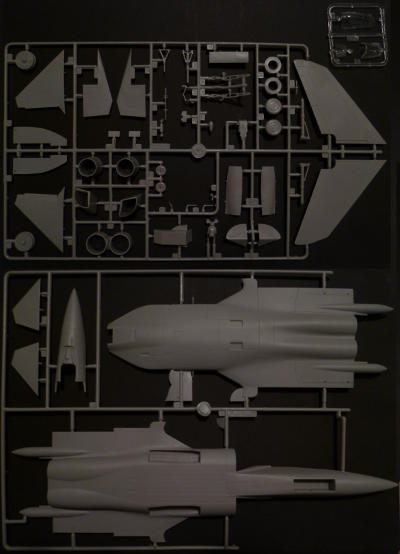 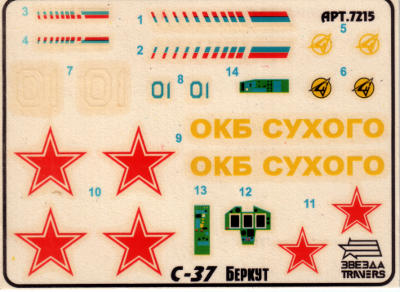 The people at the Sukhoi design bureau like to mess with other peoples minds. That means they have the nasty habits of re-using type numbers as it suits them, and that they'll change the designation of a given machine if it makes a better joke. The Su-47 started out as the Su-37, but after a while the numbers of their Flanker family also reached 37, so they remaned the 37 to 47 and re-used the Su-37 name for the latest and greatest Flanker. When the kit came out, this was still the 37, but by the time I started work on it, it was 47. No idea how long it will stay that way, but I have some hope it will last for a bit.

The Su-47 was/is primarily a research aircraft, although I believe it was at some time intended for operational use. Five were built, with various test and avionics fits. The intent to use the plane operationally was then dropped, in favour of expansion of the Flanker family, and most of the technical lessons were applied to the PAK-FA fighter, which emphasises stealth over supermanoeuvrability (although it is still very agile), instead. The Su-47 remains the closest the world ever came to seeing a fighter of this configuration, and would have been one impressive and exotic beast had it ever reached full production status.

The kit is quite basic and relatively coarse, but given that this is an aircraft that doesn't have a whole lot of external detail anyway, that's not a problem. It did tempt me to start it while dealing with some issues on a NFM Dakota; I had hoped to have the basic shape complete by the time I was ready to paint that one black, and hoped to deal with both planes at the same time. No such luck, as fit on this kit isn't all that great, and more work was needed than I'd bargained for. Nothing drastic, but enough to miss the window of opportunity. The only part that really isn't up to it's job is the ejection seat, but I have quite a pile of resin KH-36s lying around.
One thing that does immediately catch your attention about this plane, other than it's unusual configuration, is it's size; it dwarfs a Dakota in the same scale. I realise planes have grown in the years between the design of the Dakota and the Su-47, but still, a fighter has no business being larger than an airliner. One day I'll teach it some manners, and park an Airbus 350 in 1:144 scale next to it; see how it likes being the little runt for a change. 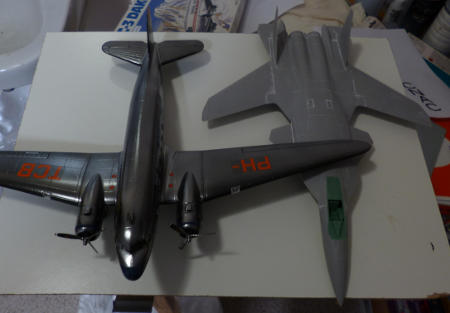 2014-09-12
After missing the window of opportunity to paint it along side and NMF model, the Su-47 managed to miss another one. It is, however, now the bench dweller closest to completion, being built, primed, and part painted. Shouldn't be too long before I get this brute completed.

2014-11-01
This plane is certainly putting up a fight. I painted the white areas, only to find out I'd missed several spots. After correction, I found I still didn't get them all, requiring another iteration. Once that was done, I made the horrible mistake of hitting it with some cheap black paint which I was using for some other job. Cue total disaster. Left the mess to settle for a while, then reprimed. More trouble, in the form of cracking paint. The model is now sitting on the bench awaiting corrective sanding.

2015-02-01
I got most of the crackling out, although it took two iterations of sanding and painting, and some remains. I'll leave it as is, and hope the final dull black finish will cover for me. The plane is now waiting for a final coat of black before work resumes in earnest.

2015-03-01
The paintwork on this one is fighting me all the way (more accurately, I keep finding new and exciting ways to screw up paintwork), but I think I've finally nailed it. The first of the decals are on; not the best I've ever worked with, but they'll have to do. I need to finish this thing at last, and I'm no longer really in the mood to be too picky. Really soon now...

2015-03-15
To my rather considerable relief the kit had run out of nastyness to throw at me, and the remaining parts went on without complications. The beast is complete..