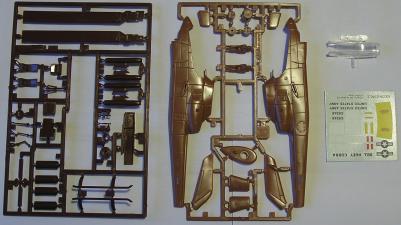 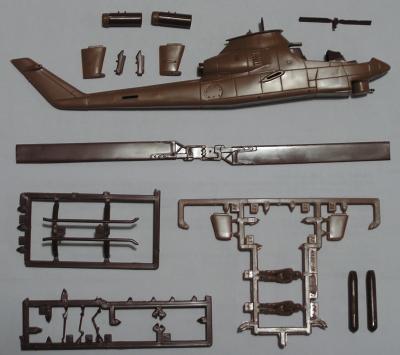 Most people who know me would tell you that I'm not a helicopter person. Some might even add that I agree with the theory that they don't so much fly, as are repelled by the earth because of their excessive uglyness. So, what is a helo doing on this website? To put it bluntly, it is being robbed. I need 15 of those gunpods often found on Cobras to stick under a Phantom (what can I say, the airforce had a few too many one night, and tried this), so I need a source for some masters to copy, and this Cobra is it. I don't care much for my chances of getting rid of an incomplete Matchbox kit, so I figured I might as well slap the bird together.

So, what have I got to work with here? The kit I found was not an original Matchbox, but rather the Revell reissue. It comes complete with all the disadvantages of a true Matchbox kit: crude detail, trenches instead of panel lines, and probably dubious proportions. Revell added to that a type of plastic that is very soft and way too flexible, almost squishy, and removed the one component in Matchbox kits that I still like, the display stand. I'll do my best to make this resemble a Cobra, but this is certainly not going to be a work of art.

The pictures to the right show the sprues of the kit, and what became of them after about an hour of cutting and glue slopping. Its now time for some work with sandpaper and filler.

2005-08-13
It hasn't been a good half year for this poor log, but at least I did manage to get some work done on the kits themselves. As a result, the Cobra has reached the point where all it needs is a bath and bit of paint. 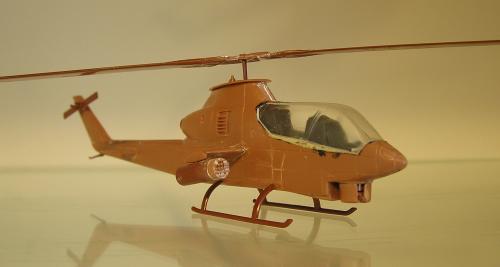 2005-08-23
Both the bath and the paint have been applied. The Cobra is now dark green, and awaiting decals, and a little detail painting.

2005-09-30
Well, the Cobra is complete. I still don't like helicopters, but it isn't ugly enough to get banished forthwith. I guess I must be mellowing with old age or something.
Now, where are those pods..