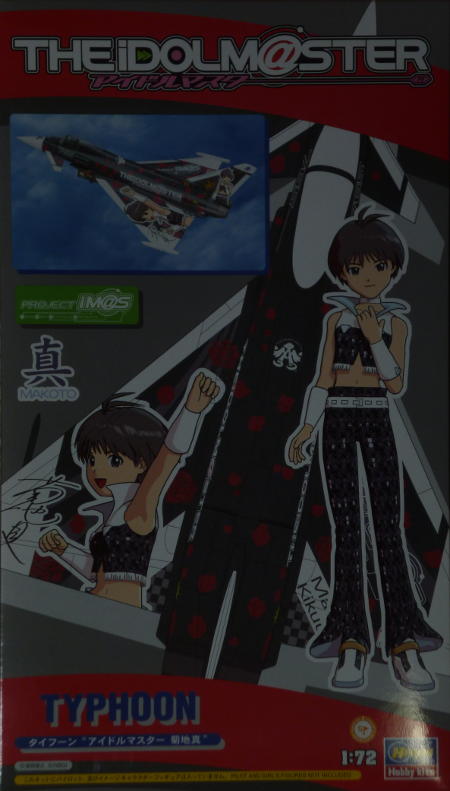 I picked up this kit on a really cheap sale, and figured I'd use aftermarket decals to turn it back into an operational machine. However, this was entirely too good an opportunity to do something wierd to pass up. Red glitter it is..

The kit itself isn't really a Hasegawa moulding, in fact, I don't think they had a Typhoon of their own when they produced this kit. Instead, it is the second Revell moulding (a completely new third has just come out at the time of writing, and the first was from the late 80s). It is moulded in very dark grey plastic. I also had a normal Revell boxing, is pale beige, in the stash, and I like having two or more colours of plastic in a build. I pretend this makes it easier to see where one part ends and the other starts, but it is of course a mental illness brought on by too many Matchbox kits at a very young age.

Initial work quickly revealed why Revell cut new tooling for the Typhoon. Although nice enough detail wise, fit is terrible, and judging by the amount of flash and a few short-shot parts, the mould is not in the best condition. Some parts around the cockpit try to occupy the same place, and when I'd finally carved the HUD out of the shapeless blob that was supposed to be it's base, I found that the (round) screen was too large to fit under the windscreen. I'd expected a fairly quick and easy build, instead, I'm looking at a filler hog. 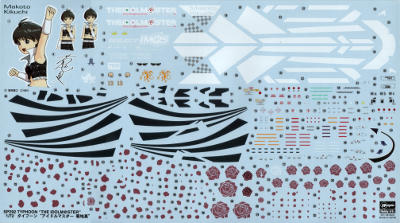 Still, if it won't fall into shape, I'll be happy to hammer it into shape. Main assembly is done, dealing with the seams can begin. Bring me a bucket of filler and a ream of sandpaper..

The kit still includes the full weapons loadout from the Revell boxing (apparently deleted in the new tool..), but none of that will be used. Even if one were willing to suspend disbelief and accept this crazy paintjob, no person with a shred of self respect would fly into battle looking like this, unless the intent was to have the opposition die laughing. A very smug grin was detected from the spares box..

2017-01-14
The ejection seat is dangerously exposed without the canopy, so before tearing into the filler and sandpaper part, I wanted that safely covered. This meant slow going for a while while I fitted and installed the canopy. Some minor details needed attending to, like the step introduced (by design) by the part meant to make te area behind the seat look busy, but which was not matched by a step in the canopy itself, and the fact that the angle of the rear end of the canopy doesn't match that of the fuselage. You know, the sort of minor niggles expected from an early seventies kit. Bit odd for a 2005 moulding though.
Anyway, the canopy is on, the faults have been fudged away, and tomorrow I can roughly mask it for protection during the coarser work.

2017-01-20
I'm sorry to say it took a few iterations of filling and sanding before I liked what I saw. I'm actually considering writing off the other kit as a paint mule, and stick to the Hasegawa kit for any serious Eurofighter work.
Still, I got it sorted eventually, and today I finally got to spray on the black. By implication, the model is now a single spot painting session away from getting hit with decals. Lots of decals. No really, lots and lots of decals..

2017-01-30
I've started putting on decals. Naturally, this is quite complex, but for the most part, Hasegawa did a good job and designed the decals taking into account the various bumps and ridges on the plastic. Not all of them, however, so I'll have to keep alert and be ready for some fudging. It doesn't really help that the decals are very thick. It also doesn't help that one of the Gunze decal solutions has taken a dislike to my paint, and is causing a bit of crackling. I'll have to implement some fixes, and put an extra protective coating on the model before proceeding. I consider myself lucky this issue showed up on the underside of a wing, rather than topside.

2017-04-23
After many interruptions, I've resumed work on this model. Progress will be slow, a few decals at a time, in no small part due to the fact that many decals overlap, but actually, that's perfect for now. I won't have time for long build sessions outside the weekends for a long time, but this is perfect work to do in short evening sessions.
I'll be taking some liberties with the markings, especially on the lower surfaces, as some of the actuators are in the way of the decals there. Rather than attempt nearly impossible patchwork with small, stiff decals (as supplied in the kit), I'll be leaving those gloss black, and cutting away or overpainting any decal that ends up half covering them.