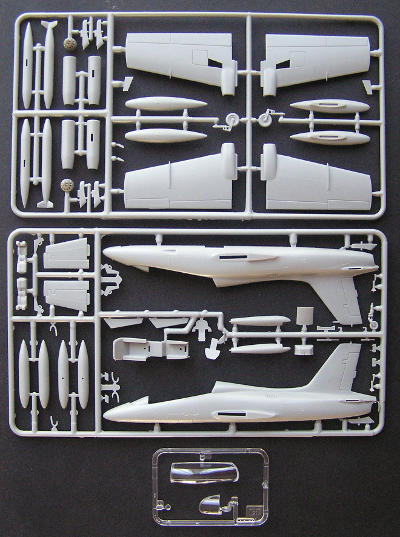 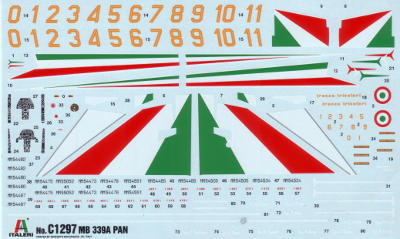 Ages ago, I'd picked up Supermodel's MB339 kit, in hopes of finding decals for the Frecce Tricolore team for it later. Inspection of this kit confirmed the brand's reputation: interesting subjects, but expect very basic kits that are likely to put up a fight. The kit languished in the stash, and I never got the decals for it, in part because I didn't really hunt for them.
I still wanted to do a Frecce Tricolore plane though, and when this set showed up, it was a welcome surprise. Finally, there was a good kit of the MB339, and in the right colours too. You can probably imagine my disappointment when I found out it was just the old Supermodel kit with new paperwork. Still, this at least gave me the decals I needed.
In it's own way, this set is quite interesting. It carries the Italeri brand, but none of the kits inside are, in fact, made by Italeri. To their credit, they don't claim otherwise, and all kits are properly attributed to their respective manufacturers: Supermodel for the MB339, Revell for the G91, and Academy for the Sabre. This seems to be a trend I quite like these days, openly stating who's kit is being reboxed.
My disappointment at finding the Supermodel kit should not be considered criticism of Italeri's offering; the Supermodel kit, to my knowledge, the only kit of the MB339 in this scale, so short of cutting a new mould, they had little choice in the matter, the G91 is probably the best in this scale (certainly better than the Matchbox), and although I can't judge the relative merit of the Academy Sabre, it certainly looks like a good kit that will largely build itself.

The kit itself is, as can be seen from the sprue picture, very basic, especially when one keeps in mind that about half a sprue's worth of parts will not be used. Frecce Tricolore typically carry a single fuel tank under each wing, so the other four are obsolete, and they never carry rocket pods either. Cockpit detail is non-existent, and the ejection seats have hollow backs. There is not the slightest indication in the plastic as to where ventral fins at the rear of the fuselage are supposed to go, and the nicest thing that can be said about the undercarriage, is that it is included. Like I said, it lives up to Supermodel's reputation..

2012-11-23
Once their backs are stuffed with filler, the ejection seats look like they might actually look good when painted. The cockpit, such as it is, has been glued up, and the fuselage and main wings assembled. The wings are OK, but will take some doing to join with the fuselage. The fuselage, on the other hand, is problematic. The two halves don't quite fit as well as they should, and the now inevitable filler and sandpaper sessions will destroy all those raised panel lines running accross the join. Whoever came up with the idea of having the gate between runner and fuselage right on top of one of the panel lines, ought to be shot. Repeatedly..
I've resigned myself to the fact that I'll have to sand the whole thing smooth, and forget about panel lines alltogether. Not necessarily bad, in this scale it actually looks quite good, but it ticks me off. Once I've dealt with the fuselage, I'll have to do some serious hacking on the backseaters console, which is too narrow to span the width of the cockpit. Just for the heck of it, I've also assembled the rocket pods, which will go into the spares bin all ready to go. No idea where they're supposed to go, but who cares.

2013-11-10
Over the past year, this kit has seen a minimal, but steady amount of attention, and is now approaching the point where the paintshop will come into view. Generally, fit was only so-so, in the case of the airbrake below the fuselage so bad that I preferred to leave the part out completely, and stuff the hole with filler. The canopy also had little interest in fitting nicely to the fuselage, which meant some scary activity with Valejo filler and a file. The rest of the main parts took the anticipated amounts of filling and sanding, but nothing excessive. I've just given the kit it's pre-primer bath, and will probably prime it next weekend, presumably followed by some further corrections once the primer has pointed out the imperfections. 2014-01-03
Surface finish turned out to be quite nice, so I moved directly to airbrushing on the dark blue. I gambled this would provide a proper background for the silver underside instead of bothering with a black base, a decision which by now has turned out to be correct. The blue paint wasn't overly interested in covering the primer, which was surprising, but some spot painting and a second coat convinced it. I'm now in the process of painting the undercarriage prior to starting work on the decals. This implies I'm getting really nervous just about now, because in this case, the decals will make or break the kit, and I'm expecting a serious fight from some of them.

2014-01-17
Decal fit has been nasty, as I feared. The decals covering the wings are too big, extending well past the edges, while those on the horizontal stabilisers are too narrow, leaving a gap between the decal and the fuselage. These things really shouldn't happen; the size of the various parts is constant, and some test fitting before sending it all off to the printers could have prevented this. The white isn't opaque enough, making patching hard, another unneccesary problem. So far the wing bottoms take the price for shoddy fit though. The spot where the wing and the air intake meet is tricky, of course, and was split into two decals. Refer to the picture above for the "excellent" fit of the decal intended to cover the gap. I ended up sacrificing a bit of decal from the Sabre from the same set in order to get some extra white, in the expectation that at least it would have the same opaqueness level as those from the MB339. Predictably, they were better, which isn't good in this case, but due to the location of the patch, I think I'll get away with it.

2014-02-23
Somehow, this kit just kept dragging on, but in the end, I think I managed to do a reasonable job of it. Completely in line with the build process, I then ended up forgetting to take proper pictures of it. Should have been easily remedied, if not for the fact that the model ended up in a different collection here. Fortunately, someone else took a good shot at the meeting of the local IPMS chapter..