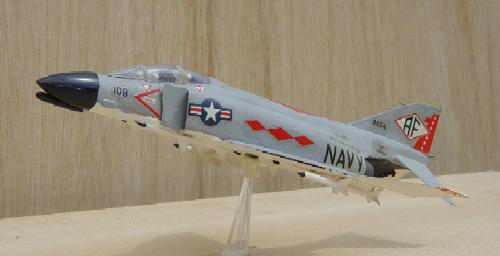 An old Revell F-4B, right out of the box. Lousy fit, and tons of rivets. Markings would have been a lot nicer if I'd managed to get them on straight. The box art showed the plane armed with Sparrow missiles under the wings, as well as under the fuselage. Unfortunately, the inboard pylons were not provided, and so I fitted the missiles under the outboard ones. Of course, the missiles' wings were too big for that, so I had to clip them. Felt real proud of that at the time.

Here we have a pair of Matchbox Phantoms, pretending to be an F-4J of the Blue Angels, and an F-4D of the Iranian Air Force. The Blue Angels kit originally had the extra long front leg, since it was intended for carrier operations, and the F-4K the kit really represents also had the extended leg. This was later corrected. The decals are from a Hasegawa Cougar and probably incorrect for this craft, but on the whole, I still like the result.
The Iranian craft got its markings from an Esci set of after market decals. It is also one of the few airbrush jobs that turned out reasonably well with the all-or-nothing Badger thing I had at the time.

The next plane, below this text, is an Italeri RF-4C, built right out of the box.

Last, but in my not that humble opinion certainly not least, an F-4D built straight from the Monogram kit. One of the last kits I built before the hobby faded to the background for a few years.