For as far back as I can remember, fighters from the nearby air force base were seen in the sky over my home town, until they were replaced by hideous helo's. (I don't like helicopters; they might be usefull, but so is manure, and as far as I'm concerned, that not the only shared characteristic). The earliest ones I remember were NF-5As, followed by F-16s, and so that's what this page will start with.
The first pictures are of a Matchbox F-5A, horribly mutilated by yours truly to impersonate an F-20. Thankfully, this doesn't show on the pictures. The second F-5 represents one of those sold to Iran, before that nation went out of fashion with the US, built from the Airfix kit.
The F-16s depicted here are a fine example of what desinformation can to to a well-meaning modeller. The top one is painted in colours that are obviously too light, but some source I trusted at the time assured me these were the correct paints to use. By and large I like the result, but it doesn't really look like an F-16. The one at the bottom got its nose extended after I read an article in the local newspaper that mentioned a special reconnaisance version supposedly operated by the Dutch airforce. I never heard or saw mention of such an 'RF-16' since, but that didn't stop me from doing the modification (badly..). Kits by Matchbox and Italeri.

While we're on the subject of kits that were messed up due to incorrect information, allow me to introduce my attempt at an F-15. There was nothing really wrong with the basic Hasegawa kit, although I would have liked decals for those black and yellow bands. It even had panel lines. However, the moron at the local model shop sold me a jar of Polly-S acrylic paint, which he swore was the best paint available, and absolutely accurate in colour too. The colour obviously isn't right, but worse, the paint was so horribly thin it was almost impossible to get it to cover properly. In retrospect, I think this paint was thinned for airbrush use, and might actually have done a great job if applied with one, but I was using the hairs on a stick sort of brush, and ended up putting close to a dozen layers of paint on to get an even colour. The whole incident made sure I stuck almost religiously to Humbrol enamels for at least a decade after that. It also wiped out the professional reputation of Herr Hobbyshop (as a person I'd already written him off years ago). As my number of acquaintences in the hobby grew, I found this opinion was shared by the vast majority, and it is a mystery to all of us how the shop survived.
Other than that, the kit isn't so bad. Everything was handpainted, including the black and yellow bands, without the benefit of masking tape or any kind of panel line to guide the brush. The kit was built when the AMRAAM missile was still largely unknown, so I think the extra underwing Sparrows, fitted to scratch built sidewinder launchers, are amusingly prophetic, even if far from correct. 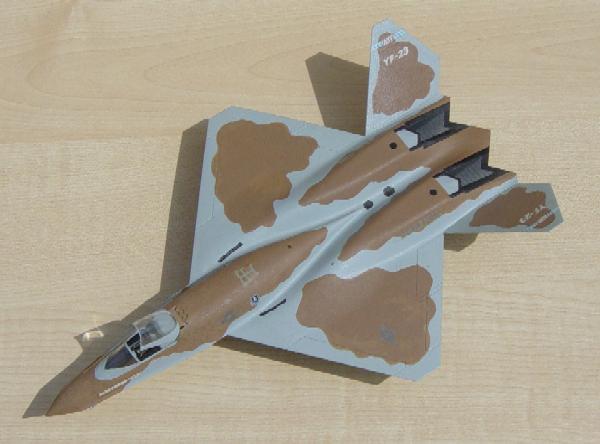 A special visitor from the local science fiction convention: the YF-23. Too bad it lost the ATF competition to the much blander YF-22. Had it won, we might have had something really good looking is the sky, to compesate for the JSF's uglyness. Anyway, this one is build from the Italeri kit. I'm rather pleased with the result, but it should really have been airbrushed. Said tool wasn't available at the time, but a new attempt is on the agenda. 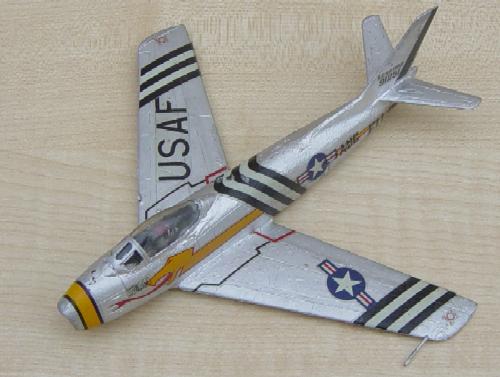 The final US built planes. To the right, a Sabre built from the Matchbox kit. At the time I built it, I was in the mood for some serious vandalism, so the plane is "battledamaged" in ways better not published on the other side of the fuselage.
Below is a Starfighter, also by Matchbox, which I felt needed a bunch of missiles. I don't really expect any F-104 to have flown in this particular configuration, but I believe all hardpoins can carry a sidewinder, so I guess it is theoretically possible.
Below that is some Harvard variant from a Heller kit, in the colours of, if I recall correctly, some African airforce.
Below the Sabre is the Matchbox kit of an A-4 Skyhawk. It used to have rocket pods on TERs on the wing pylons, but in that configuration, the rocket pods extended below the wheels, which seemed a bit unpractical during take-off and landing..

Time to take a look on the other side of the Atlantic. For starters, a pair of Harriers. The single seater is built from the Esci kit, the trainer from a Heller/Humbrol kit. Although the trainer is very short on detail, I don't think there are any other kits of this bird available.

Most people aren't born with wings, so some unfortunate airplane is going to have to absorb the punishment of teaching people to fly. Here we have an Airfix Bristol Bulldog, which looks more or less as it should, and a Matchbox Strikemaster, which is really just a Jet Provost with an attitude. The strikemaster is doubly cursed, as it also has suffered considerable abuse while teaching me how to properly build model airplanes. At least it didn't get riddled with 'bulletholes' like the Sabre, nor was it made to haul around an RB04 missile on the centreline, as was the fate of an unsuspecting Cougar..

Further East accross rather less water is the home of the next two, a Heller Ouragan, and a Heller Mirage 2000. The Ouragan is forever trying to sit on its tail, and the Mirage carries a weapons load that is certainly not factory authorised, but otherwise, I'm happy with these two.

Next stop Italy, which supplied this Italeri Tornado kit, in Italian markings, and of course partially made in Italy. The kit was built at my grandparents' home however, which was not in Italy.

A little further East, and all of a sudden they start painting red stars on their aircraft. Although the next two don't have that particular insignia on them, they're certainly members of the club. A KP Yak-23, and a Hasegawa Mig-17.