This kit is based upon the anime movie Porco Rosso by the Ghibli studio. Don't let the sillyness of a pig pilot or the fact that it is an animated rather than live action movie deceive you, the movie is great fun even for adults. Almost by accident, I found out that Finemolds had hooked a bunch of kits to the movie, and given that I've taken a liking to flying boats, I just couldn't resist.

The kit represents an imaginary subject, and given my previous experience with SF kits, this is reason for some fears about it's technical quality, but on the other hand, it's produced by Finemolds who have a reputation for treating such subjects with the same level of seriousness one would expect for any other model. As far as I can tell at this stage, the reputation is well deserved. Inside the box is a collection of high quality sprues, and an instruction leaflet of which I read perhaps twenty words, as the rest is in Japanese only, but it appears to go into considerable detail about the background of both the fictional plane, and the real world aircraft that would have been it's contemporaries and on which it is up to some extent based. The decal sheet has decals for the movie version, plus quasi historical decals for an Italian airforce version. I'll be building the movie version, of course, but the Italian insignia will probably come in handy later.

The plastic from which the kit is made is just a little softer than the rock hard material often seen these days, but it holds detail very well and is easier to work, so I must admit to a liking for it. On the down side, considerable amounts of plastic are red, and red plastic is unpleasant to work with. Paint, even primer, has difficulty covering it, and having to sand it is an experience best forgotten as soon as possible (this remark is proof that I haven't managed since my previous encounter with it..)

So far, I've built and painted the display bases, shot primer over the interior of the plane and the figures included, and done some preliminary construction. 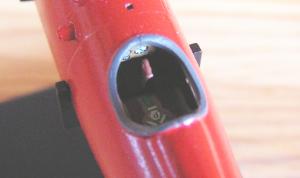 2007-05-04
The kit is almost completed, and I'm beginning to like Finemolds' work. I won't say this kit assembles itself, but it was close. In fact, the only part that put up any kind of resistance was the fuselage, which apparently was slightly bent. Nothing that couldn't be solved by glueing the front first and the rear later. Even the engine pod struts, and those connecting the wing to the hull, line up perfectly. The interior of the cockpit is sparse, but everything that can be gleaned from the movie is there, and all the parts just fit into place. The seatbelt decal was somewhat stubbern about lying down, and later on I found out this has nothing to do with it's awkward shape and position. Finemolds' decals need serious persuasion with solvents to properly hug the plastic.

It's obvious from the fit that Finemolds pays attention to the little details that make life just a bit easier for us modelers. For example, the underwing floats are close to identical (ok, I'll admit I haven't been able to find the difference, but in this case it's the thought that counts), and you do want to put the correct float on each side of the wing. You also want to paint the floats before installing them, which will make telling them apart difficult. So, the designers put different index pins on them, to make it impossible to mess up except by brute force. Nothing overly important, but I appreciate these little touches.

What I don't really appreciate is their sense of colour. The decals for the undersides of the floats and hull are mucht too dark, and in some cases, the struts and the spinner cap come to mind, they just plain get it wrong. Check your references folks! With the bottom decals out of the picture, I've found myself having to do this the hard way. Masking a shape as complex as the bottom of the hull is hard, and with the very high contrast between the colours, you have no room for coverups either.
This is where things started to bite. I'd primed the hull with the usual rattlecan stuff, sprayed the underside Radome Tan from the XtraColor range, and left it to cure for about two days. I then masked the bottom wth Tamiya tape, shot red over it, and removed the tape, all within a few hours. Nevertheless, quite a bit of tan came off with the tape. I then tried to touch up the damage with a hair brush, and made matters worse, as the new paint tore ever widening gaps in the old coat. Very funny, I was quite beside myself with laughter when this happened...

So I ended up leaving the whole miserable mess to thoroughly dry for a few days, then removed most of the damaged paint, masked the red parts, and re-sprayed the bottom with tan. This inevitably resulted in some tan ending up where it wasn't particularly wanted, but fortunately, the old Humbrol red doesn't come off all that easily once properly set (no idea what the new Humbrol stuff does, it's generally no match for it's elders), so some carefull touches with cotton swabs and white spirit took care of that. That left the actual demarkation between red and tan to deal with. I was pleasantly surprised at how easy this turned out to be with the trusty old hair brush, and even more at the way the airbrushed and hairbrushed red agreed to be the same colour.

The pictures above show the airplane as it was just over a week ago. About five seconds after the picture was taken, the wing jumped off the shelf, and both floats came off. If I ever get my hands on that Murphy character, things will get very ugly..
Anyway, the floats are back on the wing, and the final bits and pieces have gone on the engine pod. All that remains now it to do some very minor touch up on the pod, and then the wing assembly will be as complete as it will ever be. 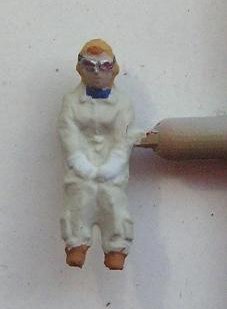 While the Marco miniature has plenty of room to get into the cockpit at the very end of construction, Fio's is rather more built into the plane. Consequently, this miniature took priority in painting. In the finished model, only the head will be visible, but just to be on the safe side I painted everything. The real thing is only about 15mm tall, so if the painting appears crude, I beg some tolerance. The figure is by now tucked away in the hull, with the lid stuck on as well as the windscreen. I originally planned to mask the windscreens with metal foil and airbrush them, but somehow I just couldn't get the masking right, and gave up, opting to paint by hand instead. I'm either good or lucky, because both worked out well.

The more I look at the bottom of the hull, the grumpier I get. Right on the edge between red and tan, some of the tan chipped of at the very rear as well. It's just not good enough, I'm going to have to fix it. To avoid a repeat of the earlier problems with the interaction between old and new paint, I've put on a coat of Future to act as a barrier. Hopefully, I'll be able to touch up the tan with good results that way. If not, I'm in really deep trouble, because at this stage masking and airbrushing in that area is pretty much impossible. 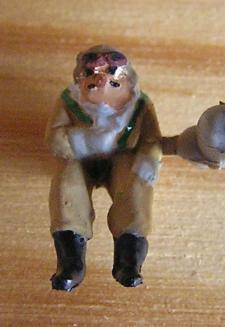 And boy, was there trouble... Producing paints that will cover a not too dissimilar colour in one go seems to have gone completely out of fashion with the various producers. After the first layer of paint, the bottom of the craft looked like something had gotten sick and vomited on it. After the second layer, there was hope, and only after the third layer did an even coat of paint manage to form. On the bright side, whether because of the Future or because of the qualities of the old red paint, I managed to keep the edge between the colours nice and sharp by swiping off any paint that got out of control with a small brush dipped in the unspeakable mixture of solvents I use for cleaning brushes, without any interaction occurring with the red.
Anyway, enough bitching, neither the kit nor the subject can help it that paint doesn't like me, and in the end, I won. Once the paint had been tamed, final assembly of the plane was easy, and the results can be seen surrounding this block of text, along with the small Marco figure just prior to installation in the cockpit. The larger figure is still being painted at this time.
Just when I'd finished the kit except for the final protective coating and was feeling rather smug, Future decided it just had to prove that it too could bite. It went on nicely, but apparently I overdid it ever so slightly, and a visible teardrop formed on the bottom of the hull. Just for good measure, this teardrop, which would otherwise have been all but invisible, had managed to pick up some red pigment from the sides and top, and left it in an ugly semi circle smack in the middle of the tan. Howls of dismay and frustration were heard, although I obviously deny all knowledge of their source. After the howls had died down, I went after the bottom of the hull with a bucket of paint again. Putting the paint on had by now become routine, although time consuming. I'll freely admit to chickening out and not putting on another layer of varnish, Future, or whatever afterwards; leaving good enough alone seemed to be called for.