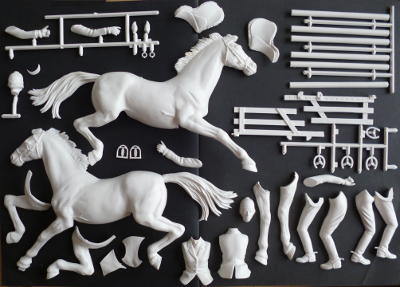 2017-01-08
The host for the local IPMS group's Newyear's meeting sets a theme for the informal competion there each year, and this years theme was simply "Airfix". OK, I can do Airfix..
But, since the theme was Airfix, I felt obliged to do a typically Airfix oddball subject, the sort of thing that set Airfix apart from the competition. I first considered one of their bird models, but couldn't find any in a timely fashion (started looking way too late, of course :roll: ). Once that was eliminated, and without any real hope of finding one, I looked into the Showjumper (bit of meta-gaming going on here too; the judges are all female, couldn't really care less about the silly little aircraft, and there might just be a horsegirl among them). To my amazement, I found one almost immediately, for not at all that silly money. True, the box was a wreck, but the contents were as good as new.

Overall, it's a pretty decent kit, but there are some issues, especially with the horse. It feels to me like they scaled up a 54mm design without corrections. As a result, all the (presumably) muscle detail is significantly overstated, and way too sharp edged to look like a flesh and blood creature. I took the edge of by dumping a blob of filler in the 'trenches' and smoothing that out with a wettened thumb. This also applies to the veins? just behind the front legs; I couldn't find them on the real thing or pictures thereof, so I filed them off. Also note that real horses do not have seams, while the plastic one has a lot of them. All of this adds up to a lot of work with sandpaper and filler before the horse becomes decent.

It is often suggested that the model is based on Princess Anne, and the face of the rider is certainly a good representation of her in the early 70s. The rest of the model, on the other hand, certainly isn't. 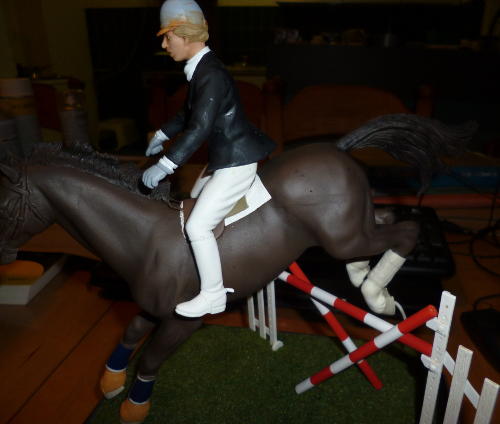 The saddle flares out from the horse, which just looks silly, so, foolishly, I dunked in into very hot water, in hopes of softening it up and shaping it around the horse. It softened up alright, and immediately transformed itself into a work of abstract art. So much for the kit's saddle. Forced by my clumsy destruction of the saddle to really look into details, I learned too much (even though it's next to nothing) about jumping horses to accept the model as anything but two total beginners (horse and rider).

I decided early on that I wasn't going to buy this "any resemblance to actual persons living or dead is entirely coincidental" thing, and build this as the Princess. At the time, she was a really good rider; you don't get into the Olympics otherwise. A good rider doesn't have her legs flying off in all directions during a jump, but the figure does; they're thrown out much too far to the sides, asymmetrically, with the right leg in particular looking like the second after the model's snapshot will have the rider on the ground in a pile of bruised limbs, and the horse wondering where she went.

I attempted a fix by slightly angling the left leg inwards (filing off a bit off the top and from the lower edge of the join to the right leg), restoring fit, and then sticking a whopping 2mm shim into the top of the join between the legs, bringing the right leg in considerably, while introducing horrible fit issues between the legs and the torso. Fortunately, the join between the legs and torso is mostly hidden, so this can all stay a bit rough. This modification assumes the rider will be standing in the stirrups to help absorb the impact of landing, rather than sitting in the actual saddle.

The obstacle shown in the kit is a type never used for matches. The configuration with a horizontal bar, and two bars placed with one end on the frame and the other on the ground is only used for the initial training of horses for jumping. The top bar is shown about 3 feet off the ground, pretty much the lowest lever ever used in matches, but in line with a training setup (the record stands at 7 or 8 feet). Due to the way the display is set up, this cannot be changed to a more challenging level; this would either require surgery to the horse and suspending it in mid air, or putting some horizontal distance between the horse and the obstacle.
Note that this contradicts the occasionally voiced theory that the kit shows a situation where the horse has knocked off part of the obstacle.

The saddle included with the kit is a traditional "English" saddle, sort of general purpose but really optimised for dressage. It could be use for some low level jumping in a pinch, but no serious jumper would use it. Certainly, the Princess used a completely different setup, which looks like a slightly modified version of the jumping saddle shown in the wikipedia page for "english saddle". Most promimently is that while just about every saddle I've seen pictures of has the girth strap attached to the rest of the saddle underneath the leather parts, the Princess appears to have this strap running all the way round over the saddle (and thus clearly visible). Since I totalled the original saddle, scratchbuilding a correct one was the obvious choice, albeit a time consuming one. 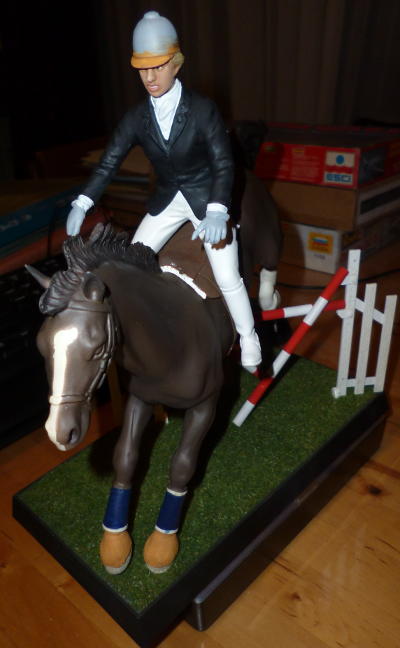 I started out by wrapping a piece of leather around the horse very tightly (thus exploiting the flexibilit in the leather to force it into the complex curves of the horse's back), smooth side down, and then drenching the rough side with CA. I'd created a barrier of tape on the horse, but this proved unneccessary; the rough side soaked up the CA, and the smooth side blocked it. Once the CA had cured, I had a fairly decently form-fitting start for the new saddle. I then cut and filed away everything that didn't fit inside the outline of the planned saddle, and used a mixture of filler, paper, more CA and milliput to build up the complete saddle.

The rest of the horse's equipment is also lacking. The kit indicates a single rein, and a basic girth strap. This is what you'd expect to see for casual riding or dressage, but jumpers use a more complex setup of straps. They also invariably have windings or boots around the lower legs of the horse, to support the legs during tight manoeuvres and to protect against impacts on barriers (the Princess used windings on the rear legs, and boots on the front), and often rubber caps over all but the very bottom of the front hooves. All of this would have to be scratch built to turn this into a rear jumper.

The polo wrappings on the rear legs proved impossible to build directly onto the legs, as did proper continuous wrapping. I built up a layer of epoxy putty (cheap, course, far too fast milliput equivalent from the local DIY) around the legs to serve as a base for the windings (same was used as the basis for the boots on the front legs). Around this I then build and overlapping affair from masking tape, later coated with CA. This made acceptable, but certainly not perfect, windings. They should have been narrower in the middle, and resemble stiff boots rather too much now. Given that I'm DNF anyway, I might end up going back to that area for a second round.

The boots were much easier, simple tubes of putty built around the legs, with tape and CA rims.
The hoof protectors (whatever they're called in the business) were again just layers of milliput (no skimping here..), with the ribbing sculpted in while still soft.

Visible much clearer in the pictures than in real life is the path of a drop of errant CA that ran out over the hindquarters of the horse, and the coat on the left side of the neck doesn't look quite right either. Again, I might indulge in some fixing there.

2017-01-09
I stripped the overly crude and bulky windings off the rear legs.
My supply of green stuff went off, so it will be about a week before I can continue on the legs (new green and brown stuff on the way, but sadly, instant delivery mail order has yet to be invented). 2017-06-09
I finally made a start on the replacement windings on the rear legs. I think I'll end up with six or seven wraps around each leg, so this will take some doing..
Rather predictably, I once again ran afoul of one of the great mysteries on modelling: how to all those sticky materials know where they are supposed to stick? Clearly they know, since wherever it is, that's the one place they won't stick no matter what. And vice-versa, of course..

2017-06-11
Another day, another winding. I switched to green stuff just to help see what I was doing, and will probably keep alternating colours.
I might actually be getting the hang of making these windings. By the time I finish the last one I'm ever likely to do, I should be good at it..