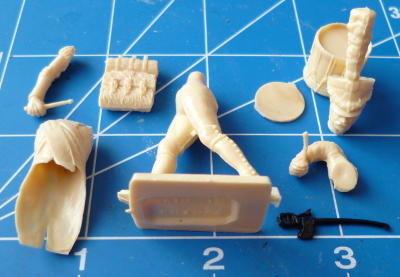 When I was getting up to speed with Napoleonic figures in the early 80s, Segom were already on their way to becoming a forgotten name in 54mm, found only as leftovers in some shops. I suspect their exotic choice of material and competition from Historex on the same subjects and market, using the more conventional styrene and much higher quality tooling, destoyed them in this domain (I believe their flats and 15mm went on much longer, perhaps to this day). In some ways, this is a real pity, as their animation was much better than Historex's, and I think their parts layout had a clear advantage over the more traditional kind.

As can be seen from the picture, the torso is hollow, and the legs extend into that hollow. Since the parts separate along the same line as the clothing, this means all of the trousers are one part, and all of the coat another (this is not uncommon, of course), and that the coat falls 'naturally' over the trousers. The latter is a neat trick; you could paint the parts separately, and not worry about perfect fit or filler-and-touchup when joining them, as the minimal gaps along the join are in the correct location for the real thing and thus do not need correcting. It does require some very thin edges to the torso part though, and tricky moulding to get the part right. Maybe that was one of the reasons they went with acetate. I'm no materials specialist, but at first glance this would be impressive moulding in styrene even now. Still, I like the idea.

I only ever had one of these in the distant past, a French 7th Hussar, and my attempt to build it was an unqualified disaster. All that remains of it today is the instruction card that came with it. I don't take defeat lightly, and I hold grudges with the best of them, so a rematch was clearly called for. Problem was, I didn't even now the name of the brand (not mentioned on the instructions..). An evening of searching the net revealed that particular bit of information though, and also that they still showed up occasionally on eBay. Within a week a small batch of these distant memories was on it's way from the US. It's almost too easy these days...

One of the models in this batch was a trumpeter of the very same 7th hussars that had clobbered me ages ago. Not the exact same kit, but close enough; revenge will be mine..
Now, revenge is serious business, and it's unlikely I'll get a third shot, so I'm not going after this one first. It's companions will teach me what to look out for with these kits before I go for it. Pretty much at random I picked the current victim from the small stash of these.

Segom kits had their undeniable charm, but they are, shall we say, basic. The drummer is a grand total of 9 pieces, the drumsticks are almost comically undersized, and the sword looks like a toy. The detail is a mixed bag; on the one hand, what is there is beautifully done, on the other, it's not exactly complete. Obviously absent is the rear half of the drum carrying belt (it's there in the front, then vanishes at the epaulette), and the rather prominent protective sheet drummers wore strapped to their left leg. Fit of the arms to the torso is more implied than present, which makes the epaulettes, of which one half is on the arms and the other half on the torso, a real problem. Stark contrast to the drum; the round part that closes the bottom fits so snugly that it's practically a snap-tite. All the parts will need rather serious cleanup too. The instruction sheet is a scrap of paper, roughly A6 in size, with an "artist's impression" pen drawing of the subject on one side, and text-only colour callouts on the other. Still, I'm no longer an inexperienced schoolkid, and I doubt those were ever the target audience in the first place, so I should manage if I can avoid a bad case of perfectionism..

I've cleaned up the legs sufficiently for a first shot of primer to point out what I missed, and to start thinking about what to do about the leg protection. 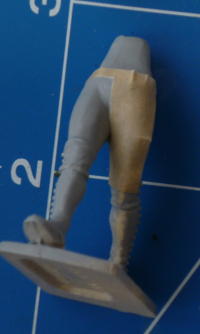 2016-02-28
I think I've found the solution to the leg protection:
I cut out the shape of the piece of cloth/leather (no idea which, really) based on a Historex part from thin paper, which I then soaked in watered down wood glue. The result was both clingy and sticky, and went onto the leg with little further fuss. Once this has thoroughly cured, I'll shoot several layers of varnish over it to make sure it stays stuck, and than make the straps holding it in place around the leg from vinyl tape (or whatever crazy idea enters my mind at the time..). Buckles to be swiped from the huge pile of Historex leftovers I still have from last millennium.

I've cleaned up the other body parts as well. The torso seems OK, but despite cleaning the other bits don't really seem to understand where they should join with it. Some fighting and nasty language expected there.

I won't be trying to fix the epaulettes. Instead I'll just file them off and replace them, if possible by scuplting new ones right onto the figure (need some training in that department), if that fails, I'll raid the spares box again.

The drum is a really nice piece of plastic, certainly on par with anything else currently available. The drumsticks, on the other hand, are a disaster. I'll have to replace them, but these are remarkably complex shapes, and I'm not so sure the spares box will come to the rescue here. Could get interesting..

2016-02-29
I just spent some hours bringing order to the chaos of the spares box (well, sort of anyway), and I actually found several sets of sticks. Three cheers for the spares box!

Navigation trail: Home » Figures » Segom drummer of the 67 regiment of the French infantry of the line 1809