A friend of mine is, to put it mildly, a David Bowie fan in general, and a Labyrinth fan in particular. Little surprise than that when someone brought out a board game based on the movie, it had to be added to the collection. The set contains five figures of main characters for use as game pieces, supplied in boring plastic grey of course. Cue hints that a bit of colour on them would be nice, and a certain fool volunteering to make it happen.
The figures are roughly 1/35, maybe a bit smaller, so big enough to get some decent detail in. 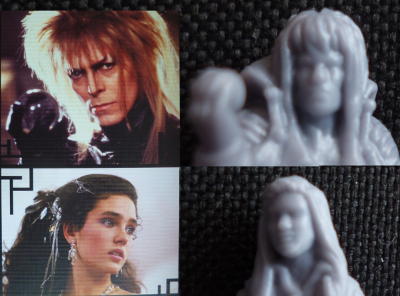 Ludo and Hoggle are quite acceptable. For some reason Sir Didymus lost his eyepatch, and his bristling moustache has been reduced to roughly hair shaped blobs to the sides of his muzzle. What really bugged me though, were Sarah and Jareth. Observe the uncanny similarities between the figures on the right and the originals on the left..

I realise it's not realistic to expect top grade figures in a set like this, but this looks like they didn't even try. Not so bad, of course, they're game pieces, not match grade figures, except that it gave me a really bad case of AMS ambition. I'm going to try to rip the faces off, and re-sculpt them; it hard to make them worse, so I have a chance to improve things even without any measurable sculpting skills
Of course, that's when my survival instincts kicked in, and pointed out to me that I was dead if I irreparably messed up the figures. OK, fine, I'll take the long way to this then. Enter a bucket of rubber and resin. I may not be a great sculptor, but I'm a decent copycat.
I'll make a bunch of casts (hey, they're almost free), and then start ripping faces of and replacing them with (hopefully) properly shaped blobs of Milliput/Green Stuff. Meanwhile, the plastic originals will be kept safely out of harm's/my way.

While the copying was going on, I started work on Ludo
There's artist's oil paint on there, so he'll have to spend some time drying before I start adding reddish brown highlights to his fur, but so far, I'm pleased.

Ludo's been drybrushed with burnt sienna. Other than the excessive shine, which will later be dealt with with varnish, I like the fur. Hoggle has been given a sand base to serve as a base for the oils for the skin.

2017-11-19
Given the quality of my first attempt at putting a new face on Sarah, and that I want to have a presentable set before the end of the century, I've decided to paint up a pair of the cast figures as well, to be replaced with updated versions later.
A shot of primer reveals that while the casts are certainly workable, I have a problem with very small airpockets, as can be seen in the picture. In view of the many casts I've done before that didn't have this issue, I'll blame this on the less than fresh resin I'm using, and the fact that the rubber I'm using is not the recommended type for resin. No real issue for "short run" items.. 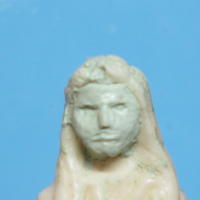 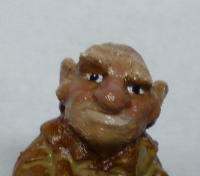 2017-11-26
Another day, another Sarah... I think that, with a bit of post-processing after the putty has cured and a decent paint job, this one might actually do..

2017-12-03
Ludo's nearing completion. A dark wash on his horns, very dark grey on his toenails, and (after varnishing) some gloss highlights in his eyes, and he's all set to roll some rocks. 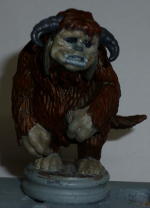 2017-12-22
When the paint had dried, Ludo had turned quite blue in the face, which is just wrong. So, I had to start over, this time with Davy's Grey instead of Payne's Grey as the base colour. The mixture of grey and white, predictably, was entirely unable to cover the darker grey underneath, so I spent yet another week waiting the the initial coat to dry sufficiently.
The mixed up paints survived that time in perfectly workable condition, so I could continue with a second coat today. Davy's Grey is the perfect neutral grey, which means it looks absolutely ghastly on anything organic, so I added just a bit of Burnt Sienna to the mixture, and for the second coat, blended that onto the skin. This still left the lighter part looking too dead, and too light when compared to the original, so I dumped in some Raw Umber to make it darker, without adding more red.
Not too bad, but I'll be doing some further touch-up, and adding a bit of red to his cheeks, in a few days. 2017-12-31
Some more work went into Ludo, and I finally have skin that should do the job...I think. Then again, I thought that before. I'll just have to wait and see for a bit.
Meanwhile, the OOB Sarah is done. I know, not exactly the face that launched a thousand ships, but it's the best I can squeeze out of that sculpt.

2018-12-25
Benchtime!! It exists!! Incredible... Still, finally found some, and decided to start out by working on some far-too-long-time bench queens. Or kings, in this case. OOB Jareth is done. 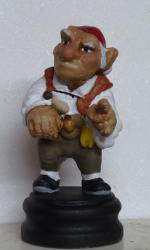 2018-12-26
I got some work in on Hoggle:
Not much more to do, but the very sloppy line between his boots and their soles is probably a hint I should call it a day.
In the mean time, Sir Didymus and the second re-faced Sarah have been hit with primer. I hope to airbrush them white tomorrow.

2018-12-27
They turned white alright, but why does it always seem to be freezing when I airbrush. It's tricky enough without having to deal with finger going numb. I must be doing something wrong.. 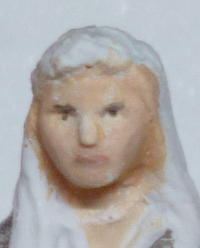 2018-12-28
The new Sarah just got some colour to her face.
Still not launching a thousand ships, but with the right personality, she might manage one or two. Certainly good enough for me to be rather pleased with my first sculpting project. Now, if I can just manage to make the hair look even remotely real, this should do.

2018-12-28
Hoggle is complete.
The revised Sarah is beginning to come alive. Next session should see her completed.

2018-12-29
Sarah's also done. I'm not entirely sure about my attempt to replicate the uneven colour of her jeans. It's clearly not to scale, but a solid coat of blue paint doesn't look right either (tried that on the OOB one).
Now come the hard parts: the Didymus/Ambrosius combo, and rebuilding Jareth's head.

2018-12-30
Ambrosius has been given a very thin wash with Davy's Grey in the spots where he's roughly greyish rather than pure white. A lucky guess with the paint, but is seems to have worked. This does mandate a pause in working on this particular miniature, due to the infernally long drying time of oils (as opposed to the totally lovely long working times of oils... wait a minute...)
I've roughly cleaned and primed two casts of Jareth. Tomorrow, I hope to deal with detailed cleanup before I proceed to rip their faces off and pull their hair out.

2019-01-20
The first attempt to make hair from hemp was a total failure. I'd flattened the head of a surplus figure, brushed on some CA, and shoved a bundle of fibres into that. The fibres promptly sucked up the CA, resulting in a 5mm pole standing up from the head. Will try again with CA gel once I've found some.