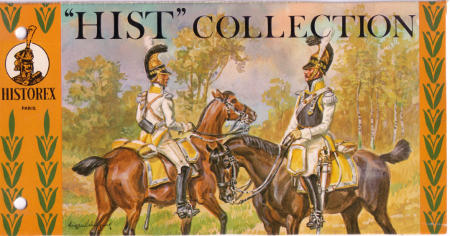 This figure has been clogging the bench for the better part of three decades. I intend to leave the existing work alone, and just finish it.
Historex were at the top of their power in those days (they're still good, but not that good anymore - range has been reduced slightly, mouldings aren't as fresh, and QC occasionally slips up, but I'd still recommend them to anyone getting into figures), so other than the somewhat stiff pose, the kit is simply perfect. Finishing this one should be a walk in the park, unless I somehow damage the yellow parts. These were painted in Heller 7002, and although to my surprise I still have that particular tin, I have no idea about the state on the contents, or the degree to which fresh paint would still match 30 year old work. Best not to have to find out, I guess..
I have no idea what I used for the silver, so the same holds for those parts..

2017-01-15
Very little progress on this figure. I was planning to attach the arms prior to putting on the breastplate, in order to be able to clean up the join between arms and torso without putting the breastplate in the danger zone. However, since I swapped out the right arm to one holding up the sword in salute, this is not going to be possible. I'm just happy I caught that before I stuck on the right arm. Still, the left arm is on and awaiting cleanup. Dealing with the right arm is going to be nerve-racking..