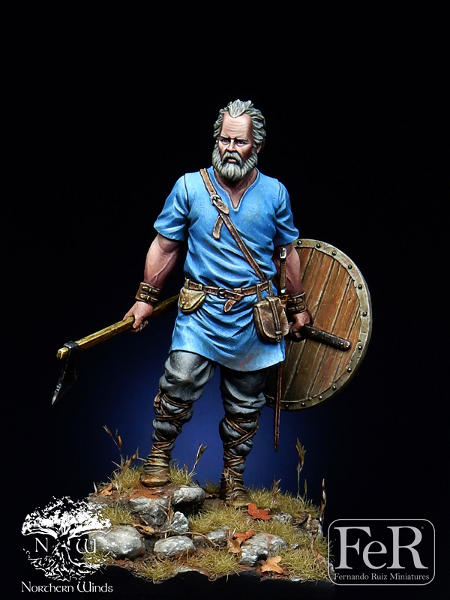 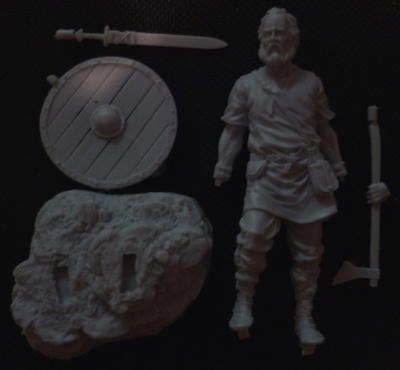 I picked up this kit for little more than peanuts a few weeks ago, together with some out of production, and as it turns out, rather disappointing metal figures. Really odd; the two kits for which I placed the order in the first place are relative duds, the two kits I added to the order more or less on a whim are very good indeed. Happy accidents and all that..

The official story is that this figure is in 54mm scale, which is supposedly measured from the eyes to the bottom of the feet, but this one measures 60mm by that measure. Either someone messed up the scale, or this is one huge viking.
Not that this matters a whole lot, he's going to be all by himself anyway, so scale conflicts are impossible. What does matter is the very high quality of the sculpture. Dry fitting of the few parts doesn't show any problems either. At the risk of tempting fate, I'll say this should be smooth sailing all the way.

2017-11-18
I've done the initial cleanup of the castings. As expected, not a lot of work there. I did find some fit issues though; the feet and the base needed a bit of work, so there's now a bit of Green Stuff hardening on the base. The shield hand fits perfectly after some minor drilling, but the axe hand is less cooperative. I don't think I'll be able to create a seamless join there, which means I'll have to attach the hand and do some work with filler before painting. Fortunately, it looks like I'll have sufficient room to work even with the hand attached.

Similarly, I don't think the base will get in the way all that much, so I'll take the chance of attaching that as well before painting. That will be after I sand the thing down cosiderably; these several millimeters of thickness to the base that aren't really part of it, but just a glorified casting block. Alternatively, I might just sand the bottom smooth, and fake some further rockyness around the blocky rim (decision postponed until I get rather more sleep and just maybe a working brain again)

2017-11-18
That thing about tempting fate earlier? She's nothing if not predictable, and promptly took the bait. It appears my viking has a bit of a bad leg..
This is after two rounds of cleanup, and I've clearly got some work left to do before that mould mis-alignment is cleared up.

I've added a rim around the base to give the milliput I'll use for sculpting over the very deep pouring block.

2017-11-26
Nothing picture-worthy this weekend, but the casting issues on the figure are all but dealt with, and the base has had it's edges sculpted up a bit. Painting should start for real next weekend. 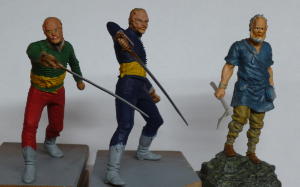 2017-12-03
The base was mainly done with some leftover Gunze acrylics a fellow builder didn't want anymore, while the legs were mostly Vallejo, with Gunze for the windings. The white basecoat on the exposed flesh is Lifecolor. Yes, that makes for a chaotic mess, but all those paints I bought for testing are going to earn their keep..
I'll add some bit of static grass to the base later, to liven things up a bit there.

2017-12-08
I persuaded him to put his tunic on properly. Pale blue basecoat, then washed with blue-ish medium grey.
Just equipment and hair left to paint now; a few more sessions of work at most. 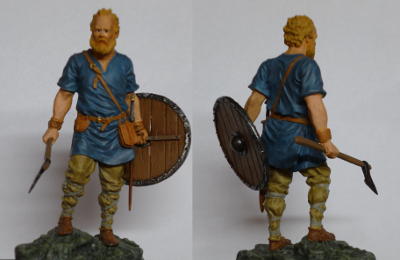 The flesh tone didn't work as I'd planned. The cunning plan was to paint the visible veins on his arm blue, and then put multiple coats of translucent skin colour over it. It was a mess. The blue paint started running when I started work with the thinned down flesh, and even in the resulting washed out state, was impossible to cover up to a good looking degree. I ended up wiping most of the mess off, and putting on several coats of Vallejo Basic flesh, followed by some washing with Vallejo Medium Flesh.

The hair was base coated with Humbrol 63 Sand, and then heavily dry-brushed with a mixture of Humbrol 63 Sand, White and 24 Yellow, to simulate that colour that can't really make up it's mind whether it wants to be blonde or red (I think it's called 'strawberry blonde', but I don't think I should risk calling a tough ol' viking one of those...)