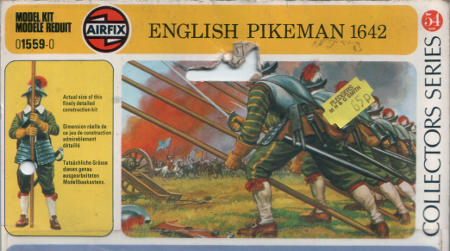 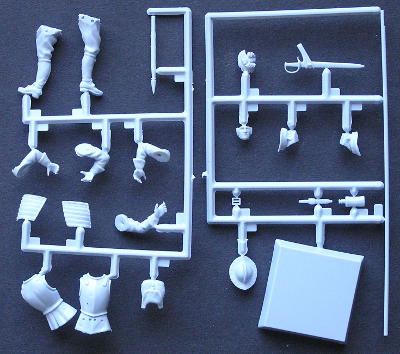 There are several reasons for me to start work on this figure at this time.
First, I've always been a great fan of the Airfix 54mm figures, whether part of the so called "Collectors Series" of older subjects, or the "Multipose" series of WWII infantry. When I got back into scale modelling, I made it a priority to get a fresh supply of these.
Second, this particular figure hold the destinction of being the oldest survivor of my scale modelling career. As near as I can tell, the old copy was built in late early 1977, and bought in London, on an evening shipping trip with my father while my mother and her uncle were watching some opera at Covent Garden.
Finally, and this is what triggered the build at this time, the local IPMS chapter decided to put up a display of our oldest and newest builds at the Dutch nationals this year. I figured the only sensible combination of kits would be an old and a new build of the same kit.

The picture of the sprues on the right shows those from a recent re-release, but the actual kit has been in my stash long enough to turn from white to a creamy yellow with age. It was separated from it's blister long ago, so it might not really correspond to the blister I scanned for the picture, but the pricetag should tell you something about the age of some of my stash..

The kit has stood the test of time quite nicely. Detail is good, if perhaps a little bolder that a modern kit might have, an fit, aside from some minor issues, is good. These kits almost build themselves. I find the parts breakdown a little odd in places. The head including helmet is made up of four different parts, which are finicky to align, and the pike was split is such a way that the tip details are at serious risk while smoothing out the join. Of course, that won't stop me from inventing some trouble for myself along the way.

Like always, Airfix include a very thin sheet of polystyrene to construct belts and straps and such from. I could never get the hang of working with that material. Fold it back on itself, it breaks, glue it, it disolves. The great struggle of my early days. The ribbons Historex includes are so much easier to work with, but I never got them to look like the leather they're supposed to imitate. These days, I use vinyl tape from the local DIY. Only CA will stick to it, but it's otherwise easy to work with, and looks good. I'll have to break out that tape on this job, because if I want to pose the figure with one hand on the pike and the other on the sword, the sword strap will have to be replaced with something a lot more flexible than the original. I also intend for this figure to have a real working belt, as I suspect fitting a non working belt properly is going to be even more trouble.

At the time of writing, arms, legs, and torso have been joined, the head is assembled, and some work has gone into the rest of the equipment. I also experimented with adding gras to the top of the base. Not a good idea. The model gras looks pretty as ever, but the mat is almost as thick as the base itself, and the edge looks really bad. I'll have to build up the sides of the base to become a box to make this work, but that is for some other project to deal with.

2011-10-14
The various sub-assmblies have been cleaned up mechanically, and for the most part, painted. Mechanical cleanup was complicated a bit by the fact that I dropped the body on a hard floor just after what should have been final sanding and priming. This resulted in the loss of the figure's right hand, which is still unaccounted for. Fortunately (well, in this case at least), I've always kept every part that seemed usable, and the right arm of the pikeman I built in the other pose offered by the kit around 1983 was still in the spare parts box. Almost thirty years later, it earned it's upkeep, and some quick plastic surgery re-armed the pikeman. Let this be a lesson to all those who contemplate the heresy of disposing of any leftover parts.
Painting of the head is complate save for drybrushing the helmet. It's been a long time since I last put a face on any miniature, but I'm happy with the result. The body also needs but a few more touches of paint. I've used an airbrush on a figure for the first time while working on this; I saw no other way of getting those white socks (or whatever the called them in those days) right. White paint and I just don't have a good working relationship. I'm not even going to try to put those yellow bands and stipes on the figure's clothing with paint. Putting them on once is certain to be beyond my skills with a brush, and no yellow paint known to me has any chance of covering the underlying green in less than three coats. I do know how to paint decal paper though, I now have a strip of otherwise hideous, but in this combination quite workable, 'zinc chromate yellow' decal waiting for some serious work. I still expect a fight, but this time, one I might actually win. Time will tell.
Work on the various belts is coming along nicely, in fact, resistance has been so limited that I find myself liking that tape more and more.

2011-10-30
As it turned out, the decals did not put up much of a fight. Cutting them into 0.5mm strips is finnicky, and it's a good thing I had decal setting solution available, but mostly, the bands went on nicely. The belt, on the other hand, didn't go as well as I'd hoped, mainly because I cut it too short. This left me without room to tug it tight, so in the end it went on fairly loose, and I had to camouflage some slack. No fault of the material though; the tape really proved it's worth here. Other painting and assembly was routine.

As mentioned, this figure was built specifically for a display at the nationals. Obviously, it was completed less than a day before the event, so when it did travel there, in the company of it's two predecessors, it did so without even having it's picture taken. Fortunately, it survived the trip.