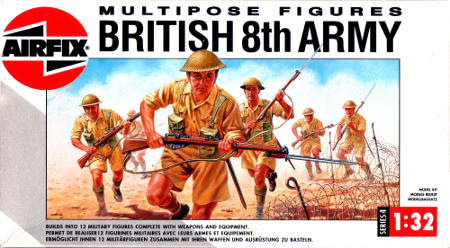 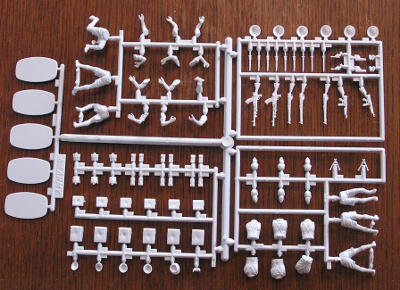 2011-10-30
Work on this set started when work on the British Infantry began to near completion. At this time, torsos have been joined to legs, and legs to bases where appropriate, but not much else. I expect to get back to these sometime during the coming year. 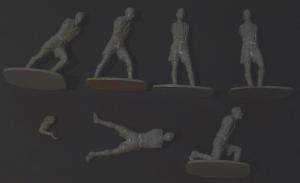 The whole "building on the road" thing collapsed shortly after this bunch was started, and from there on they languished at the edge of the bench, while I never got around to them. Recently, I've joined a local club that has regular meetings where people actualy build stuff. I prefer not to lugs too much gear around, let alone fragile models in various stages of construction, so these chaps got reactivated in their original role. Once again, they practically live in the car, and come out every few weeks for some work.

The picture above shows the current state of play. That separate arm was supposed to be attached to the running rifleman, but it had other plans. I'll give it a good stern talking to later. Getting the arms to line up with the torso and a weapon is always great fun, since it involves four parts, no room, and only two hands. The prone brengunner, due to the ways his hands are wrapped around the gun, is going to be a particular joy in this respect..