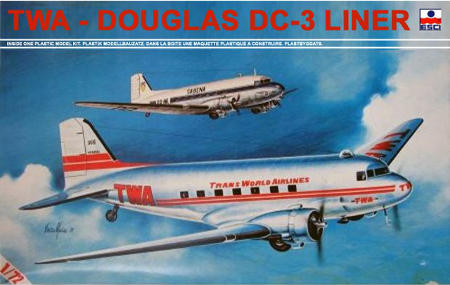 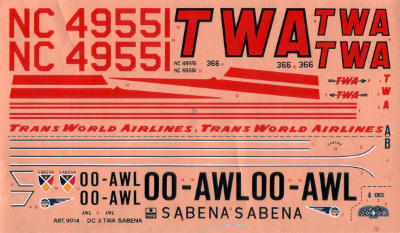 A collegue of mine mentioned on several occasions that he'd like to have a model of a Dakota. At some point, I figured I had an opportunity to build something without having to worry about where to put the result. Whether this works out remains to be seen, but it gave me an excuse to do a DC-3. Given that military Dakotas tend to come in drab, drab, and, surprise, drab, a civilian seemed much nicer.
If we ignore some really undesirable releases, there are basically two Dakota kits on the market, the 1979 Italeri, and the 1981 Esci. Apparently, there's not much to choose between them, but the Esci has a slight edge. Not knowing either kit, or the Dakota, well enough, I hunted down an Esci (and later, for something completely unrelated, an Italeri). Both kits are over 30 years old by now, but the quality is such that cutting a new tool is most likely not worth while economically. A new tool would be better, although not much, but too expensive to compete with these two. When just released, they must have been masterpieces.
The civilian version of this kit differs from the military one by only a single small sprue, that contains a new rear door, an extra bulkhead, and two double rows of seats.
The TWA version is completely metal, and should therefore be the easiest one to paint, but I'm afraid it's going to look boring. The Sabena has a white upper fuselage, which I hope will break the monotony a little. I'm more than a little worried about that blue stripe and nose though, because these will have to be painted on.
Construction, as usual, starts with the interior. The rows of seats on my kit have warped a bit, and now have a clear upward curve to them. The floor plate, fortunately, is still straight, but I'm certain the seat rows will bend it out of shape if I just stick them on. To compensate for this, I've added an aluminium bar to the bottom of the floor plate. Bend that, puny plastic bits!
I'd have liked to open the rear door, in order to keep some of the interior visible when completed, but the new rear bulkhead doesn't line up properly, and stands at about a quarter of the width of the door. Given that the fuselage tapers at this point, attempting to move it a few millimeters back is just asking for trouble I can't afford at this point, so the door stays closed. Installing the door insert into the fuselage is fidgetty, and panel lines don't line up all that well. I think I fixed that, though.
Interior colours seem to vary a lot, so I went with a best guess/artistic license approach. The decals gave me a pleasant surprise when putting on the console; they are in perfect condition, easy to work with, and the margin around the actual image is very thin. Shouldn't have to worry about silvering. That's a good thing, as I'll be using Alclad Airframe Aluminium, which apparently doesn't like decal solvents much.
I don't expect much of the interior to remain visible with th fuselage closed, so the pictures here are probably the best views anyone is ever going to get.

Those two rows of side windows are going to be something of a mixed blessing. The clear plastic parts are so thick I can pretty much guarantee nothing can be seen through them, so I don't want to use those. The windows are small enough that PVA will work, but that is best put in at the very last. If I don't have anything in there while painting, I've got to come up with some way to ensure I don't splatter all over the interior. This will be interesting, in the Chinese curse sense of the word. On the much brighter side, they'll be of great help while lining up that blue band along the sides; I don't think I'd have a chance without them. 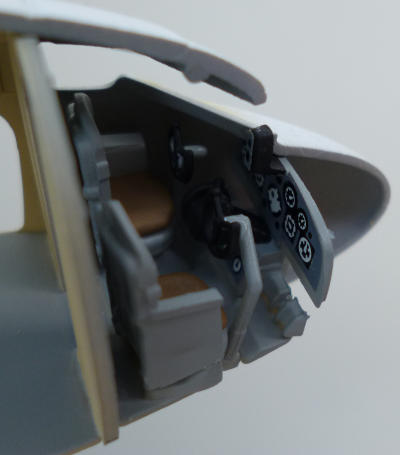 2013-09-20
Assembling the fuselage was a bit of a fight, as the halves didn't quite line up, but I managed to beat them into submission. Other than that, the fit of the various large parts was good, if not perfect. Even after the NMF went on, things still looked as they should. The only nasty surprise here came from the side door insert, which I thought I'd blended in nearly perfectly, but which has remained very visible as a bulge. The plastic didn't particularly like paint, and extra thoughrough cleaning was required to make sure the paint stayed on, instead of coming off with any masking tape. Masking and spraying was far less of a hassle than I'd feared, despite a disagreement between the white paint and my airbrush (the airbrush informed me in most unpleasant ways that it needed deep cleaning). Since conditions didn't satisfy my need for trouble, I added some of my own making by tipping over some thinned down glos black and splattering the kit with it, some of which predictably snuck under the masking tape and made a mess. Clumsy buggers like me should stay away from stuff like this..
Airframe Aluminium appears a lot darker than I'd thought, but overall I like like the results of the paintwork.
The decals are proving to be a rather nastier matter than I'd thought. I have two identical sheets, and one of them really enjoys disintegrating, while the other refuses to separate from the backing. For good measure, some also borrow tricks from the other sheet. At this point I no longer expect to be able to finish the model without doing some damage control with a printer. Seriously uncool, as I'd wanted to show off the completed kit in two days..

2013-09-21
Fortunately, I could limit my decal replacements to text-only markings, all of them black, so the old laserprinter did the job nicely. After that, it was smooth sailing until completion on Saturday, followed by showing off at the IPMS meet on Sunday, and delivery to the "customer" on Monday. 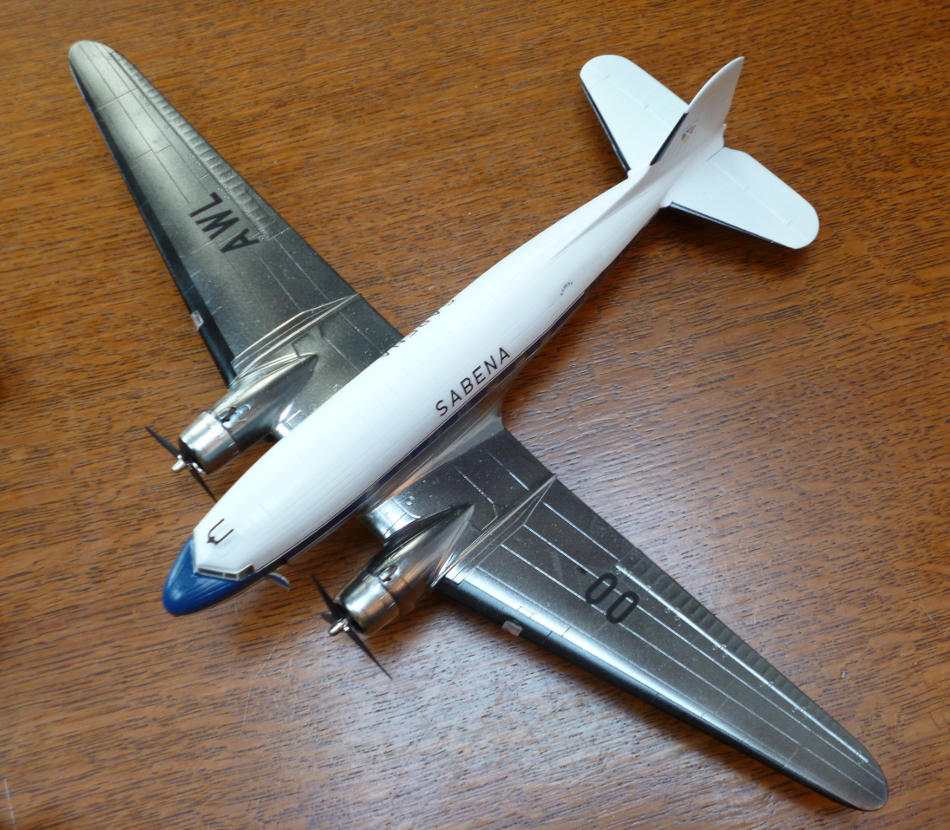